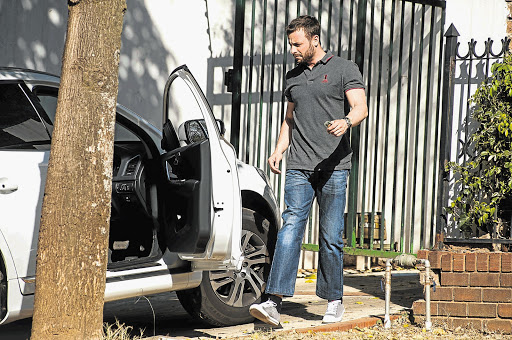 WORRIED MAN: A grim-looking Oscar Pistorius arrives at the home of his uncle Arnold in Pretoria on Thursday. He will learn his fate in his murder trial this week Picture: WALDO SWIEGERS

Oscar Pistorius threw a furious and emotional tantrum outside his uncle's Waterkloof home this week, losing his cool with a Sunday Times team just days ahead of judgment in his sensational murder trial.

Clearly showing the strain of his ordeal, a bearded and stressed Pistorius admitted that he was not coping with the pressure.

It also emerged this week that the disabled athlete has ditched all of the homes he owned in South Africa, which suggests he is bracing for a lengthy legal battle if convicted on Thursday when Judge Thokozile Masipa hands down judgment.

Pistorius exploded with anger when he pulled up to the Waterkloof house in a new white Volvo XC60 on Friday and saw a Sunday Times team.

He has pleaded not guilty to murdering his girlfriend, Reeva Steenkamp, who the state alleges he shot in a fit of rage on Valentine's Day last year. Pistorius claims he mistook her for an intruder.

Asked how he was doing, Pistorius, who appeared to have just come from the gym, angrily snapped: "How can you ask me that? Do you really have the audacity to ask me how I am doing at this point in my life? What I am going through and feeling ... I really cannot deal with this right now."

The fallen athletics star, who is out on bail of R1-million, sold the house where he killed Steenkamp at the Silver Woods Country Estate for R4.5-million this year.

It has now emerged that he has since sold two other Pretoria homes, which were listed as immovable assets in his bail application in February last year.

With a defence team consisting of a senior and junior advocate and a small army of other lawyers and forensic experts, his legal bill for the trial - which has run for 41 court days so far - is estimated at well over R3-million.

The two houses at the Weeping Willow Estates in Equestria, Pretoria, were sold for R1-million and R1.03-million, according to deeds records which listed the transfer dates as July 16 and 31.

The sale of these properties fuels speculation that he is raising cash for further legal fees in the event he is found guilty.

If convicted of murder, the fact that he no longer owns property in South Africa could count against him should he have to re-apply for bail.

Professor Stephen Tuson of the University of the Witwatersrand's law clinic said the court was likely to reconsider the question of bail in the event of a conviction.

" The court is required to reconsider, because after conviction the accused could be considered a more serious flight risk. The defence would have to make an application for bail, pending the outcome of an appeal," Tuson said.

Lawyer Ulrich Roux said: "The argument is of course that the temptation to flee is so much stronger when a convicted person is possibly faced with a lengthy period of imprisonment."

Roux said when an applicant for bail had immovable property registered in his name, it provided a measure of security "in that he has a vested interest and valuable assets in the country which he will forfeit should he abscond".

"Not having any fixed property makes it easier for a person to flee as there is no risk of losing the said property and suffering substantial financial losses."

Roux said Pistorius's legal bill could be running as high as R100,000 per court day.

The athlete's two homes in Weeping Willow Estates were sold below the price houses in this estate usually go for. Photos of one of the units, listed on a property website, show it has three bedrooms, two bathrooms and a pool.

Arena Viljoen, an estate agent for Homesdot who has sold houses in Weeping Willow Estates, said the usual price for a three-bedroom, two-bathroom unit was in the region of R1.15-million.

One of Pistorius's properties in the estate was bought by a company called Eben Kruger Bemarking. A manager at this company, Ryno van Niekerk, confirmed the purchase but declined to comment.

The other property, which Pistorius bought in 2008 for R800,000, was sold to a young businessman who the Sunday Times was unable to reach for comment.

Pistorius, who earned about R5.6-million a year at the time of the shooting, had listed the Silver Woods house, the two Weeping Willow units and a vacant stand in Langebaan in the Western Cape as assets.

It is not clear whether the Langebaan stand has also been sold.

Pistorius, in his bail application, also said he owned cars, jewellery and furniture worth more than R500,000 and had "cash investments" of more than R1-million with South African banks.

However, he also faces a potential civil claim from Steenkamp's parents, June and Barry, who have indicated their legal action is on hold pending the outcome of the murder trial.

Roux said Pistorius would not be able to plead poverty should a civil claim be lodged.

"The fact that he placed on record that he owned four properties and was in a strong financial position, as well as his access to funds through other means, will all be considered. Any proceeds derived from the sale of the properties will be considered accordingly."