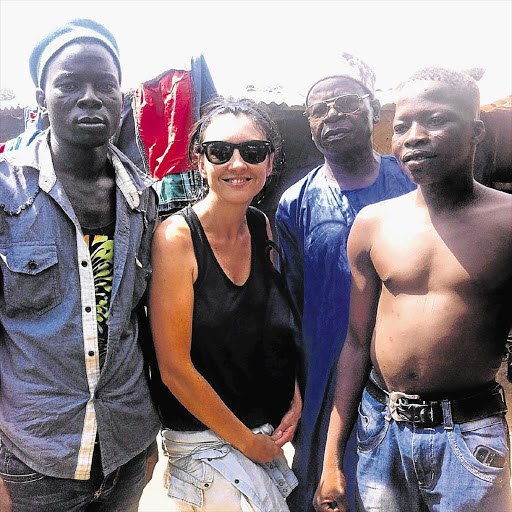 Crossman's short film based on the elusive nomadic animal handlers, is inspired by the famed photographs of Pieter Hugo. After three years spent trying to track them down, she and her crew travelled an hour outside Abuja, Nigeria, trekking through rivers, valleys and abandoned wasteland to find a lone house in the bush.

"We got there to find burly Nigerian men, huge hyenas and a lot of marijuana," says Crossman. "We thought we were going to die."

Instead, the crew integrated into the "hyena boy" community and could observe their ways of taming the wild beasts. The group is headed by father figure Baba Mohammed, who instructs the young men in traditions passed down for generations, and is fuelled by the belief that they have spiritual connections with the animals.

"Only if you can capture your own hyena, can you tame it. The baby hyena you capture stays your hyena for the rest of your life," says Mohammed.

The group sustains itself by selling the medicine crafted for protection and by capturing baboons and hyenas for rich men to entertain their children. But most of their money comes from performing in a travelling "circus", moving from town to town in Nigeria, dancing with the animals and knives in the streets.

The three-day shoot culminated in a short film that caused heated debate on the local current affairs show Carte Blanche before winning at CISF last week. Crossman, who owns TIA Productions, has also made the documentary Fatherland, a look inside the "Kommandokorps" military boot-camps run deep in the South African bushveld.

Acting as a platform, CISF allows dedicated independent filmmakers from around the world to showcase their work in nine categories.

The film festival takes place this weekend in Hollywood.