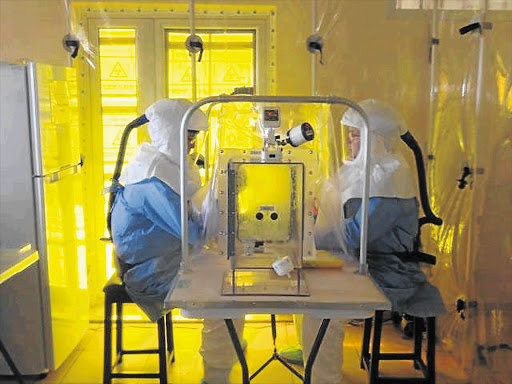 The Department of Health will set up a R10-million 40-bed field hospital for Ebola patients in Sierra Leone within a month.

The tented unit will have back-up power generators and a medical-waste disposal system, including an incinerator.

The plan is to send about 211 staff to the hospital: doctors, 111 nurses, 41 nursing assistants and 30 support staff.

About 10 epidemiologists, who will trace people who have had contact with Ebola patients, will also be sent.

The cost of the planned intervention in West Africa, if all aspects get the go-ahead, is estimated at R120-million.

Health Department director-general Precious Matsoso made an impassioned plea to business on Friday .

Matsoso told CEOs that "business and the government can work together by fending off this disaster ... [if] we don't intervene we will be waiting anxiously for Ebola to reach us."

The scale of the outbreak is unprecedented. The World Health Organisation's representative in South Africa, Sarah Barber, said there was an urgent need to increase the number of beds "three to five times".

According to Barber, Liberia only had 20% of the beds it needed and Sierra Leone 25%.

Joanne Liu, head of Médecins Sans Frontières, which has been running hospitals in affected areas, told the UN that it was turning away sick peoplebecause it"simply does not have enough capacity".

"Highly infectious people are forced to return home, only to infect others and continue the spread of this deadly virus - all for a lack of international response."

Four South Africans have been operating a mobile laboratory in Sierra Leone for the past month , working 16-hour days to manage the huge demand for testing.

The South Africans deployed to West Africa will all be volunteers. The mobile hospital is expected to operate for nine months and staff will probably be rotated.

The government is considering providing laboratory equipment to Liberia, particularly for testing blood.

So far, the response by business to appeals for help has been good.

Four ambulances were donated by private hospitals group Netcare, FNB has promised to pay for flights to West Africa, and Discovery Health has offered R500000 for protective gear.

In Guinea, eight people who had been trying to educate others about the virus were murdered;

A team burying Ebola victims was attacked in Sierra Leone's capital on Saturday; and

Since the start of the outbreak, more than 300 medical personnel have been infected with the virus and several have died.

Nations act in fighting the disease