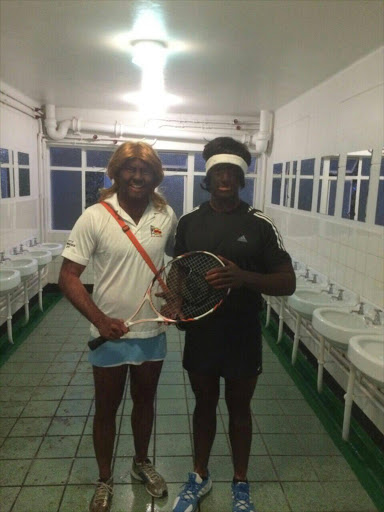 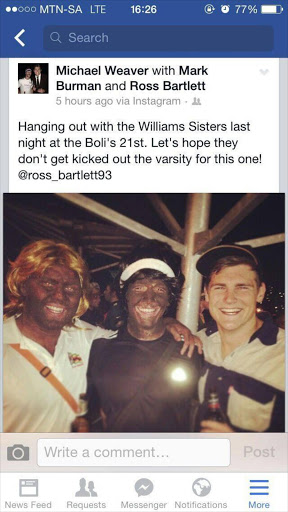 Twitter has reacted with fury after a photograph of two white, male Stellenbosch University students - who painted their faces brown and dressed up like Venus and Serena Williams emerged - the second such incident at a South African university in two months.

Last month two University of Pretoria students sparked outrage when they pulled a similar stunt. They painted their faces brown and dressed like domestic workers. After the photograph was posted on social media the university launched an investigation.

He identifies the two men, dressed in tennis gear and blackface, as Mark Burman and Ross Bartlett. They were attending a 21st birthday party.

The photo was retweeted hundreds of times. Siyabonga Nyezi wrote “Stellenbosch students with some blackface. Classy as always.”

Themba Radebeer meanwhile tweeted that it was “not surprising that it’s Stellenbosch University.”

Comedian Siv Ngesi referenced the Pretoria incident saying “After what happened to the last two! These two must get it.”

Several people called for the two to be disciplined immediately.

“Suspend these idiots immediately,” wrote user Star Princess while Michelle Avenant wrote “what can we do to make sure that these guys do get kicked out of varsity? Tell me and I’m there.”

Martin Viljoen, spokesman for Stellenbosch University, could not be reached for comment.