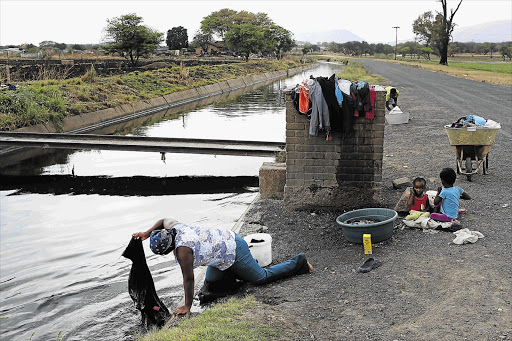 IN AT THE DEEP END: A resident of De Kroon informal settlement, near Brits in North West, does washing in a canal in the absence of clean water from the Madibeng municipality. Incompetence of municipal officials has been blamed for the area's water crisis
Image: ALON SKUY

The deaths of four children and at least two protesters as a result of the Madibeng water crisis earlier this year could have been avoided had officials heeded warnings.

Details of the lax attitude of officials of the municipality in Brits, North West, are contained in a report commissioned by the government and leaked by the DA.

The municipality, says the leaked report, is incapable of supplying water to its residents and should not insist on trying to do so.

"Madibeng decided to retain water services provision in-house, despite a lack of capacity to perform the function.

"It is important to recognise that, had Madibeng municipality acted on the advice of [Magalies Water] to replace the pumps at the Mothutlung reservoir, as highlighted as a critical issue in . 2012, the failure of water services provision in December 2013 to January 2014 would not have happened," the report says.

"On several occasions [Department of Water Affairs] staff prepared excellent reports indicating to Madibeng officials and politicians the remedial measures that were required, but few of these were ever implemented. Necessary basics such as preventative maintenance were not done by Madibeng ."

Protests erupted after a pipeline from the Brits water treatment works to the Mothutlung reservoir collapsed in December. About 30000 people receive water from the reservoir.

Shortages have revisited the area. Residents of Makau were, until this week, without water for three weeks as Madibeng owed Rand Water millions of rands. The Madibeng municipality spokesman did not acknowledge receipt of questions on the matter.