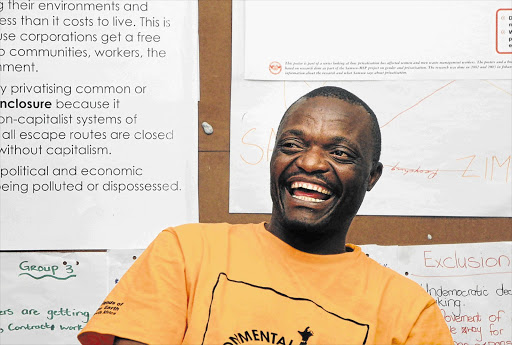 CAN DO: Rubbish collector Simon Mbata is in Rome and will see the pope today
Image: GROUND WORK

Mbata is in Rome today to participate in the World Meeting of Popular Movements, at which leaders of organisations comprised of people who believe they are excluded from society will try to find ways to end their marginalisation.

The meeting will be attended by the pope.

"It is an honour for me to represent the SA Waste-Pickers' Association on an international stage. It will allow our organisation to be taken seriously in our own country," he said.

Mbata started collecting waste when he lost his job in 1998.

He is now part of the Sasolburg Co-operative Recycling Initiative and is a founding member of the SA Waste-Pickers' Association, which represents people who collect recyclable waste on rubbish dumps and on the streets. The rubbish - cardboard, glass, plastic and tins - is sold for recycling and can result in a steady income.

"I am serious about my occupation. But not everyone sees it like that. It's regarded as disgusting in South Africa. That is one of the challenges we deal with daily.

"I hope that my participation in Rome will help bring dignity to our work," Mbata said.

"We have more chance of the government listening to us if we are organised workers. It has to happen."