Stealing a R40 million school, one brick at a time 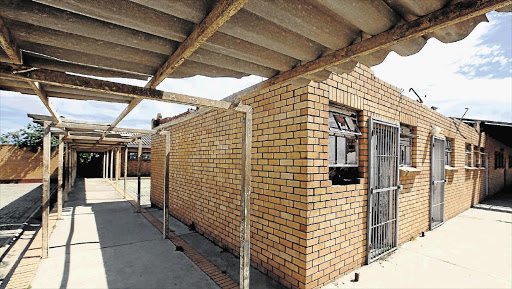 In 1994, Themba Faku often gazed out of his front window, marvelling as his new R40-million school was being built.

Last month, the former principal of Gqebera High School in Port Elizabeth watched that same school disappear in a matter of weeks, stripped by criminals.

First the doors disappeared, then the windows and frames and, later, the bricks.

"My heart aches to see the state it is in now," said Faku, who has since retired, as he stared down at the rubble and a few pillars that remain of the school in Govan Mbeki township. "What took a year to build was destroyed in three weeks. I saw people taking off the roof tiles.

"Then the trucks and vans transported them in Uitenhage's direction," said Faku.

Faku was in charge when the school opened its doors to about 1200 pupils in 1995 and remembered the pride felt by his community.

His school had 34 classrooms, a science laboratory, stoves and a computer room.

Gqebera High School was used as a voting station in every election. It was also a hub for community meetings and weekend dance classes.

Like other residents in the area, he phoned the police when he first noticed the looters. But they simply ran off when the police arrived and would return later.

It became a lost cause, he said this week.

Faku said many residents opposed a decision by the Eastern Cape Department of Education to shut down the school owing to dwindling pupil numbers - many pupils had moved to newer schools in the area.

By July the remaining 120 children had been transferred to the nearby Tyilulwazi Secondary School, 3km away.

It was as if word about the abandoned building had spread, and the rapid destruction of Gqebera High began.

Fezekile Grootboom, who lives across the road from the school, said some people in the community had fought to ensure the school did not close .

He said the vandalism was initiated by people from neighbouring townships.

At first they came at night. Later they came in large numbers in broad daylight.

"We tried to stop them, but when the number of looters grew, people from this area also started looting."

Some, he said, sold the school's material for as little as R1 a brick and R3 a tile.

He believes that the destruction of the school could have been avoided had the education department listened to community concerns about closing the school.

"We were faced with a situation where we wanted to protect the school, but at the same time the Govan Mbeki community felt that they were being robbed of what belonged to them. This is why they joined in and looted as well," he said.

Police have confirmed that 13 people have been arrested in connection with theft from the school.

Two months to gut a school

In New Brighton, about 10km from Port Elizabeth, Masangwana Primary suffered the same fate at the beginning of last year. Its doors were closed at the end of 2012.

Once the pupils had been moved to other schools, Dumisile Keseni, the former caretaker who lives on the property, was the only person remaining.

"They did it in broad daylight. When I tried to stop them, they told me that this was not my school."

He said that calling the police did not help; they either did not arrive or failed to arrest any of the looters.

There were rumours in the community that locals used the material that had been stolen from the school to extend their homes, pave their yards and, in one case, build a shebeen.

Keseni was attacked at the school. The incident has left him partly paralysed and in a wheelchair. He said he did not know if the thieves might target his home.

Departmental spokesman Malibongwe Mtima said the primary school was closed down because it had become a haven for criminals.

The looting at this school started even while its teachers were busy in class, he said.

"If they said something [to the looters], they threw bricks at teachers and pupils."

He said the department had lost more than R60-million as a result of the vandalism of the two schools.

Four other unused schools were being guarded until they could be handed over to the Department of Public Works.

Police spokesman André Beetge said all those arrested in connection with theft at Gqebera High School last month had appeared in court and had been released on bail.

"Some of the people were found on the property and busy digging, while others were caught along the Uitenhage road near the school carrying the material in bakkies and vans," Beetge said.