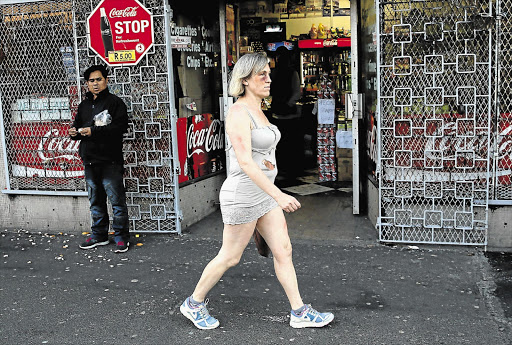 LOOKING IN ALL THE WRONG PLACES: Film director Meg Rickards walks through Cape Town with bruises painted on her face and body to publicise the coming movie 'Whiplash', about women and child abuse
Image: NARDUS ENGELBRECHT

The International Day of Artificial Insemination for Pandas. The Global Week of Sustainable Taxidermy.

The UN-sponsored Fortnight In Support of UN-Sponsored Fortnights. The passage of time for the global middle class has become a series of officially demarcated hours, randomly chosen, dedicated to empty reflection on some cause selected by a committee. Our relationship with the cares of the world has become a dysfunctional marriage in which our spouse never speaks to us but shunts a nightly Hallmark Card across the dinner table.

And yet even in this blur of arbitrary quasi-commemorations the 16 Days of Activism stands out as supremely cynical. That's not its whole name, by the way. Its whole name is 16 Days of Activism For No Violence Against Women And Children, but no one really calls it that because we all got a little gun-shy after the grammar-challenged started calling it "16 Days of Activism Against Women and Child Abuse", a campaign apparently determined to stamp out child abuse and women. At least we've refrained from shortening it to an acronym, although "16 DOA" might be a more honest name for a campaign that really was Dead On Arrival.

Others have written far more angrily and eloquently than I could about the failure of 16 Days; of how politicians line up to mouth pious platitudes about gender equality even as they cut funding to rape crisis centres and vote in favour of giving patriarchal "traditional" leaders even more power over women; about the terrible lie that 16 days of rhetoric can do anything to challenge the pandemic of rape that is South Africa's deepest shame; about the wicked assumption it creates that we are doing something constructive and can therefore do nothing for the other 349 days a year.

But as I read what others had written I realised I didn't know what the official position on 16 Days was, and so I went to the website of our parliament. There I discovered that the campaign aims "to raise awareness of the negative impact that violence and abuse have on women and children". Such abuse, according to parliament, "stems from the low status of women in the home and in society", and "happens when men abuse power and positions of authority in order to control women and children". Finally, the page told me, "the success of the campaign rests on our daily individual and collective actions to safeguard society against the cycle of abuse".

Now, call me a nit-picking pedant but that wording is as useful and enlightened as a ducking-stool for witches. Raise awareness that violence is bad? I have a feeling the victims know that already, so you might want to talk to the perpetrators. The low status of women? I suspect you mean the low status thrust onto women by men, so again, you should probably talk to the gents and not imply that this is all a big organic mess that somehow just happened naturally. Those positions of power and authority? Maybe try to make it sound less like a law of physics - or an act of God - and more like a social construct, okay?

But it was that final one that hammered home just how reluctant we are to call out men on their abuse of women. By saying that we all have to work together to "safeguard society", our parliament is painting a picture of a society that is fundamentally fine but which is being attacked by nasty outsiders, as if rapists arrive from outer space every night while human men look on helplessly.

I call bullshit. You can't safeguard a broken society any more than you can raise the status of women when your own parliament's wording implies that their lower status just happened because of, well, you know, stuff.

I know that it's #NotAllMen. I also know that masculinity is damaged and needs help. It is true that misogynist abuse and extreme patriarchy hurt men too; but these are lesser truths right now. They can even seem ridiculous, like punching someone in the face and then pointing out, truthfully, that your fist also got hurt in the impact.

Men and patriarchal institutions must stop sharing the blame and fudging culpability with generalised, collective jargon. Instead, they must use the language of diagnosis and hard, cold individual responsibility. For years we've told people: if you're getting drunk alone in the afternoon, you've got a problem. It's time to say: if your culture tolerates or quietly condones beating a woman, or if you think it's not a crime, then you've got a problem. Not the women. Not all of us. You.

If we're going to have 16 Days, let's be honest and use the M-words. Men. Masculinity. Misogyny. Let's have 16 Days of Men Not Beating Or Killing Women. Let's start there, okay?