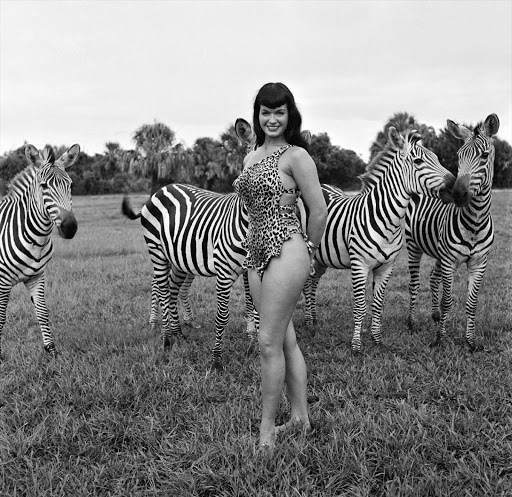 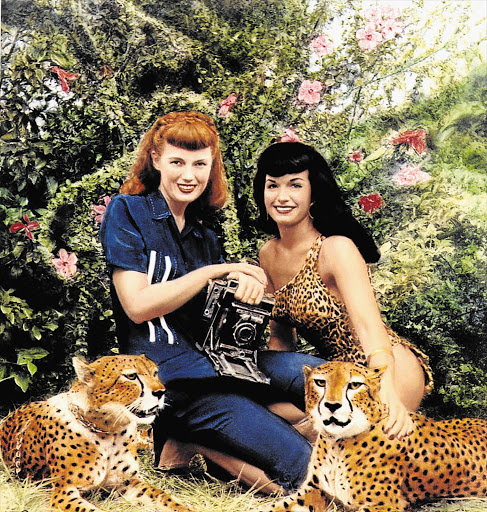 In a world teeming with "over-sexualised images of hairless, flawless skanky chicks", Petra Mason says there is a hunger for "affecting images of real women with birth marks, bruises, cellulite and bush, just like Bettie Page".

Cultural historian Mason believes the enduring allure of photographs of arguably the most famous pin-up model in history is partly because of their "profoundly self-made quality" and Page's "homespun beauty".

Some are iconic, having graced the pages of magazines like Playboy and Rogue, and others have been made public for the first time.

Yeager, who died in May, was a former model and the only woman pin-up photographer working in the 1950s. After much persuading, she allowed the Miami Beach-based Mason access to her vast archive of images, leading to the 2012 book, Bunny Yeager's Darkroom, the first time a retrospective of her work was published in book form.

Said Mason: "I've always had a passion for glamorous retrostyle, and I've always been drawn to strong, original women. Back in the early 1990s I fell for both Bunny and Bettie's charms via images collected in postcard form or softcovers.

"Moving to Miami and knowing that Bunny lived close by and had seemingly been forgotten, it was a dream project to get to create a book on an iconic woman who went from 'Miss Trailer Coach, Dade County' to superstar photographer."

A book dedicated entirely to Yeager's most famous model was a natural progression. Mason describes Yeager's collaboration with Page as "historic".

Together they "created very modern pin-ups that have intelligence, wit, sass and sex appeal".

She added: "Bettie had the perfect proportions. She understood how to pose, so it was impossible to get a bad shot of her and her face was so expressive - she could be comedic, raunchy, sultry, wacky, unlike anything seen elsewhere at the time. No one else could pull off her wacky, zany slapstick poses which had a vaudeville quality to them. She was completely comfortable nude, and her lack of inhibition was alarming for the time."

"Bettie made her own costumes and bikinis. She did her own hair and make-up.

She even helped carry Bunny's heavy camera equipment to the out-of-the-way locations where they shot their naked, and therefore illegal, photographs.

According to Forbes magazine, Page, who died in 2008, was the eighth-highest earning dead celebrity of 2013, earning $10-million.