Dewani out of frying pan, into the fire 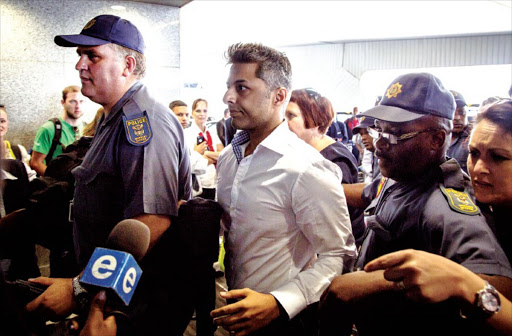 Shrien Dewani at Cape Town International Airport for his flight to Dubai en route to his home in the UK. Judge Jeanette Traverso dismissed the case against Dewani, who was accused of masterminding the murder of his wife, Anni, on their 2010 honeymoon
Image: EPA/STR

Shrien Dewani arrived in England yesterday a free man. But not only does he face the possibility of a civil suit from the family of his slain wife, Anni, his business empire might be on shaky ground.

This follows the release of a damning report on the treatment of patients at the care homes owned by the Dewani family.

PSP Healthcare, which Shrien and his brother Preyen built into a formidable business, significantly increasing its turnover after taking it over from their father, Prakash, has been lashed by UK authorities for putting patient safety at risk.

With Shrien in a mental institution for most of the past four years since Anni's murder, while the Dewani family focused on fighting for his freedom, the business and its patients appear to have suffered.

On Monday the High Court case against Dewani, who was charged with masterminding his wife's murder during their honeymoon in Cape Town in 2010, collapsed and he left South Africa the next day.

Yesterday, his lawyer's office told The Times that there would be no comment on the possibility of a civil suit being instigated by Anni's family.

Dewani arrived at Gatwick airport, London, in the early hours of yesterday morning and has yet to turn up at the family's upmarket Prabhu Krapa Villa in Westbury-on-Trym, Bristol. The Times was told that he would be spending a night in London before returning, perhaps in a bid to avoid the large media contingent outside his gates.

Anni's mother has spoken for the first time since her son-in-law was cleared, calling him a "coward".

The MailOnline quoted Nilam Hindocha as saying that Dewani had been as pathetic in applying to have the charges against him dismissed as he had been on the night he abandoned Anni with two gunmen on the night she was shot dead.

"He didn't have the guts to face us. He was a coward in the court, always a coward," she charged.

The Dewanis' PSP Healthcare, which owns and operates care homes for the elderly, was censured by the Care and Social Services Inspectorate for Wales in October after several inspections found that the "safety, health, well-being and quality of life" of its residents at their 95-bed Gibraltar facility were being put at risk.

PSP Healthcare was asked for comment on the Care and Social Services Inspectorate report on Gibraltar but had not responded at the time of going to press.

Records showed that PSP racked up £4.1-million in debt to expand and upgrade its care homes in 2010, shortly before Anni's murder.

The inspectorate's report could threaten the family's grand plans for its business empire.