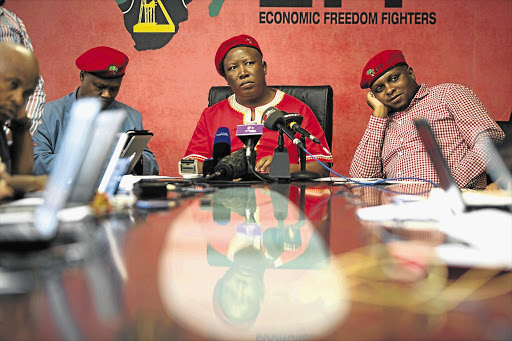 Economic Freedom Fighters leader Julius Malema has asked his "revolutionaries" not to name any land grab areas after him.

His spokesman, Mbuyiseni Ndlozi, said yesterday that Malema celebrated the bravery and determination of the homeless in "engaging in a practical struggle to reclaim South Africa as their home".

"[Malema] requests that, although humbled by the activity, revolutionaries must desist from using his name as he still has a long way to travel as a revolutionary himself," Ndlozi said.

A month ago residents of Nellmapius, in Pretoria, led by the ward 86 branch of the EFF, illegally occupied council-owned land and christened it "Malemaville".

They painted a road sign board white and used red paint to write the new name on it.

Ndlozi said Malema said that land or places must be given the names of very old, retired people, or of the dead.

He said this was because the names of neighbourhoods remained forever, even when the land was obtained illegally.

But Eddie Mathiba, the EFF member in the forefront of the seizure of "Malemaville", said his supporters would not comply with Malema' s request.

"We want to appreciate him while he is still alive. That is the will of the people; it comes from the bottom of their hearts," Mathiba said.