Cries got baby back to mom 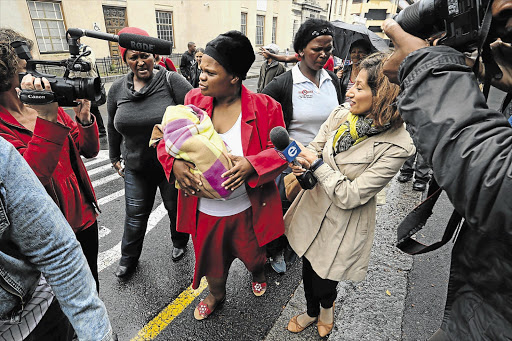 MOTHER'S RELIEF: Nomveliso Semsem with her baby Baxolile outside the Cape Town Magistrate's Court yesterday. The baby was found on Saturday after he was taken from Groote Schuur Hospital on New Year's Day. Ntombekhaya Mgqaza appeared in court on child-kidnapping charges
Image: SHELLEY CHRISTIANS

The ceaseless crying of a newborn baby held inside a shack ended a New Year's Day child kidnap drama that gripped one of the country's top hospitals and threatened to tarnish its image.

He was snatched while sleeping next to his mother in the maternity ward at Groote Schuur Hospital in the early hours of Thursday.

Prosecutor Dial Andrews told the court that Mgqaza had given the police a false address on her statement and because of this the state would oppose her release on bail.

He also said angry residents had burned down Mgqaza's home.

The hearing was attended by members of the community who said Mgqaza - allegedly a cleaner at Groote Schuur Hospital - is a sangoma and that she has four children.

By late yesterday the hospital had not confirmed that she was an employee.

Semsem said she no longer trusted anyone around her son.

"I am scared to leave him [in the care of anyone else]," said Semsem.

"I want to look this woman in the eye. Why did she cause me so much hurt?"

"What we have come across very often is that the person [the kidnapper] is in a [romantic] relationship and they have not conceived a child ... and they believe the baby will cement the relationship," she said.

"We have done research on the issue of the use of children's body parts for muti. We have come across incidents where the body parts have been buried outside business premises for good luck and wealth.

"It is also believed that if a woman goes around with a child's penis tied around her waist she could conceive a baby boy."

The case was postponed to February 13 for a formal bail application.