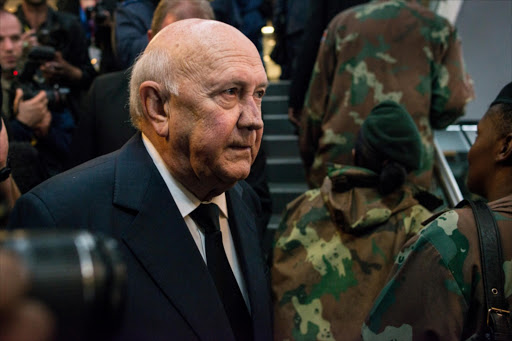 It was a long walk to freedom for Nelson Mandela but just a short drive to immortality for FW de Klerk, who shared the Nobel Peace Prize with Madiba in 1993.

The City of Cape Town's naming committee yesterday agreed to rename a humble 5km stretch of highway after the apartheid government's last president.

Ami Kapilevich tweeted: "The good news is that no self-respecting Capetonian ever called it Table Bay Boulevard. We call it the N1."

The decision must now be endorsed by the full city council, which is unlikely to overturn the committee's decision.

The chairman of the city's naming committee, Brett Herron, said the recommendation had been supported by an overwhelming majority of residents.

But the ANC leader in the city council, Cosatu Western Cape secretary Tony Ehrenreich, criticised the recommendation, saying De Klerk did not deserve the honour because he continued to defend the apartheid generation.

He said: "The best that should be done for him is for a side street to be named after him somewhere in Orania."

The former president said last year: "I am honoured and touched."

He said: "In my heart I am not at all sure that, with one or two exceptions, geographic locations should be renamed in honour of living people."

@MargieOrford: "Wrong, just WRONG that a section of the N1 highway in Cape Town is being named after FW de Klerk."

@gussilber: "Why is anyone surprised that CT wants to name a road after FW when the city's longest road is named after a Voortrekker?"