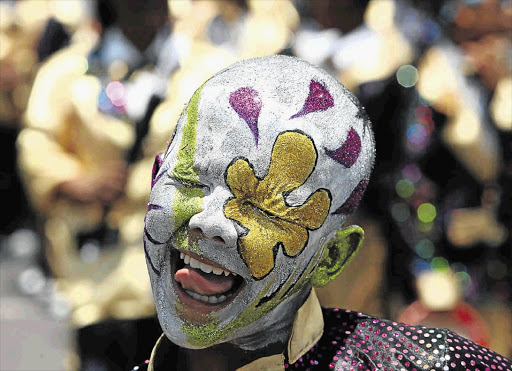 At the centre of the muddle is Richard "Pot" Stemmet, a criminal who controls most of the R50-million in funding the minstrels received last year.

Stemmet has served time for armed robbery and has been arrested several times on gun- and drug-related offences. Police describe him as "a well-known drug high-flyer".

He controls the Cape Town Minstrel Carnival Association, the largest of the several minstrel organisations. It has about 18000 members.

National Lotteries Board acting CEO Phillemon Letwaba confirmed that Stemmet's association had received R41-million from the board last year.

Despite the massive cash injections, the minstrels' biggest event - the Kaapse Klopse carnival, usually held on January 2 every year - has yet to take place this year.

Boeta Gamza Dante, 84, of the Bo-Kaap, one of the founder members of some of the troupes of the '60s, is despondent. "We used to do it for fun, to bring communities together. But now it's all about the money and the politics," he said.

Fellow Bo-Kaap resident Ismail Kahaar, 50, didn't mince his words. "Who cares when the march will take place? By then nobody will have money. We will be worrying about school uniforms and school fees."

The carnival was postponed after mudslinging between the minstrels and Cape Town mayor Patricia de Lille, who abruptly took leave this week, leaving councillor Brett Herron to negotiate a new date for the event.

De Lille branded the committee liars for claiming that the city had not given its full support to the carnival.

The ANC has capitalised on the stand-off. Yesterday, several troupes marched at the political party's 103rd anniversary celebrations, led by the D6 Group from the Bo-Kaap - an area split between the DA and ANC.

The carnival was being "undermined by a city that doesn't know how to engage with the poor", said Valmont Layne, the former director of the District Six Museum, who is now secretary-general of an African arts and culture organisation.

"There is political influence from all sides trying to win the coloured vote. The carnival represents the hope for the city to be integrated again."

Herron said the city had given the committee until March to account for money spent on the annual event. "In terms of our agreement, we have to see audited statements from the event committee by March ."

Stemmet - who is also the head of the Cape Cultural and Carnival Committee, an umbrella body established in November last year to unite the various minstrel groups, Christmas bands and Malay choirs torn apart after years of bad management and acrimony - said this week his organisation had nothing to hide.

"They will get their audited statements. We can account for every penny.

"The city wants to complain about R2-million. But when they ran the carnival, they had budgets way more than us - some say even as much as R9-million - and they didn't account to anyone about what they did with the money."

The parade dates from when Cape Town was a slave-trading port between 1652 and 1808.

The "Tweede Nuwe Jaar" parade took place on the second day of the New Year, when slaves had the day off.