Shakes he no speaka English 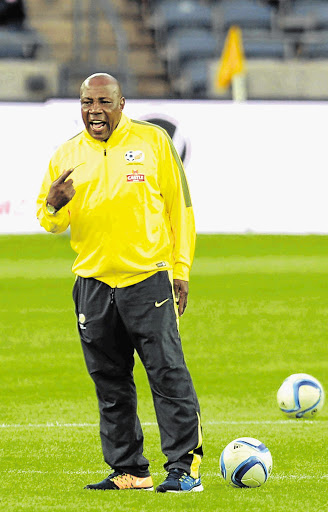 ON A ROLL: Shakes Mashaba is optimistic that Bafana Bafana can lift the Africa Cup of Nations - for the first time in 19 years
Image: GALLO IMAGES

The mind games played by Bafana Bafana and Algeria began long before their clash at Estadio de Mongomo last night.

You might have heard or read in the social media that Bafana coach Shakes Mashaba preferred to speak Zulu during his press conference ahead of his side's Africa Cup of Nations opener.

The truth is that, on Sunday night, Mashaba pulled a stunt in what has been seen as an act of solidarity with the travelling South African journalists. The 64-year-old took a decision to answer questions in Zulu - a language he said suited him - after he heard that the South African media contingent had earlier sat through the Algerians' press conference without a translator for coach Christian Gourcuff, who spoke French.

Rafik Halliche, the captain of the 2014 World Cup participants, added to the chaos when he entertained one question in Arabic, which another Algerian journalist claimed was an official Confederations of African Football language. That was met with some bemusement by the foreign press.

At another press conference, Ghana journalists had to struggle to understand the Senegal coach ahead of last night's Group C opener.

To be fair, Gourcuff had been willing to try to express himself in English when asked to do so. However, a CAF media officer seemed to suggest that it was not necessary and the coach shrugged his shoulders as if to say: "I tried."

To those in the room, now stuck with recorders full of indecipherable French and no video feed of Gourcuff discussing Bafana as the opposition, there was unhappiness with Algeria's exclusionary tactics. News of this got to Mashaba before his press briefing and he took action.

"If I can't speak in English I will speak in my mother tongue - and I speak Zulu, nothing else," said the Bafana coach as he was making his way to his seat.

An SABC correspondent fired the first question in Zulu but was interrupted by the CAF media officer, who demanded to know what language was being used.

"Excuse me," he said. "There are only two official CAF languages and they are French and English. If you want to ask a question in any other language, you must ask for permission. We're in charge here."

The press conference was cut short when Mashaba would not back down, leaving the organisers no choice but to ask Bafana media liaison officer Matlhomola Morake to translate the Zulu into English.

Talk about "Shaking" things up.