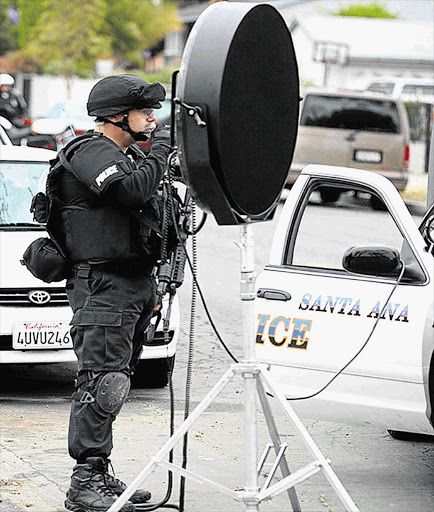 The police, looking to combat looming violent service-delivery protests, are in the market for new equipment.

Among the weapons they are seeking is the Long-Range Acoustic Device, a ''sound cannon'' designed by the military whose use as a police tool Amnesty International says must be assessed for potential human rights violations.

According to a document presented to parliament's portfolio committee on police, the SA Police Service has budgeted an estimated R1.9-million for 11 portable and one fixed acoustic devices.

Police spokesman Lieutenant-General Solomon Makgale declined to comment late yesterday afternoon, saying he had not been given enough time to answer questions. The device, according to the document titled "Enhancing of the public order policing capacity within the SAPS", is a non-lethal intervention, which disrupts a person's balance with high-intensity sound.

The document shows how the police are scrambling for extra equipment for public-order policing units as the 2016 local government elections approach and fears grow that service-delivery protests will increasingly become violent.

Other resources that the police want include binoculars, night sights, video cameras and recording devices, with the SAPS estimating that its recapacitation strategy over the next four years will cost R3.3-billion. This will include the refurbishment of 200 armoured vehicles, design of new vehicles, building of new bases and leasing of accommodation.

Criminologists and human rights experts warn of the danger the sound cannon poses, especially to innocent bystanders and children caught up in violent protests.

Human rights commentator and University of Johannesburg journalism professor Jane Duncan said: "There is no evidence of the police taking the health and safety risks of sound cannons into account. They are punted as being non-lethal interventions . but the equipment has the potential of resulting in people within the vicinity dying or becoming deaf.

"When used over a long period and at a very high volume they can cause eardrum rupture and permanent deafness . they can even cause death.

"This is bad news for the right to protest in South Africa, a constitutionally guaranteed right.''

She said Amnesty International had spoken out against the devices.

Duncan said the sound cannons would not help police isolate disruptive elements in a crowd.

"Everyone who is in earshot and who doesn't have earplugs could be affected, whether they are shooting at the police, protesting peacefully or are innocent bystanders. This is what makes this device so pernicious. It is indiscriminate.

"On one hand the police claim to be demilitarising, but on another, much more substantial level, they continue to militarise.

"It shows that they still want to choose conflict over conflict resolution in dealing with the social problems that give rise to protests.

"Police militarisation gave us Marikana. It led to Ferguson. It must be stopped before any more lives are lost or damaged needlessly," she said.

Unisa criminologist Rudolph Zinn said the Long-Range Acoustic Device was not an internationally tried or tested piece of equipment.

"South Africa risks becoming part of a 'pilot project' to see if this type of equipment actually works in a policing environment."

He said the equipment needed to be "very focused" so it could be directed only at "those people in the crowd whom you want to stop".

Zinn said experience showed that teargas, or this equipment, potentially carried the risk of turning those who were not violent, violent.

The police had to consider whether there was a risk of permanent injuries being caused, with the possibility of civil claims arising from the use of the equipment.

Criminologist and Unisa security studies professor Anthony Minnaar said the weapon was of military origin, having been used by US forces in Iraq and Afghanistan. But its use for policing was minimal and overseas there was an increased emphasis on non-lethal crowd-control measures.

"If you look at the recent riots in the US against the use of force by that country's police and the response to those riots, it was totally 'military' and completely over the top, with snipers on roofs and armoured personnel carriers.

"There are debates raging in the US on military-style policing and whether use of military and para-military equipment is correct."

Institute of Security Studies researcher Johan Burger said that to an extent he would support the police in their search for alternative ways to control crowds and lessen the use of force.

"One would support them on the condition that whatever they decide to acquire for their arsenal it will have been properly tested."