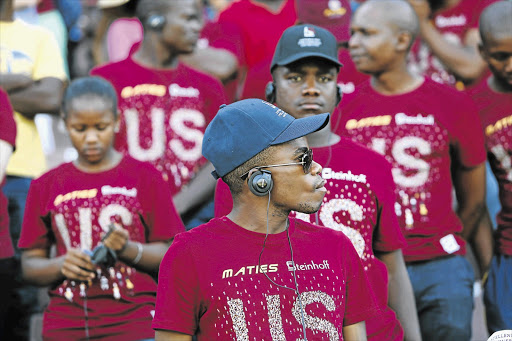 When 5,000 new Maties and their parents were officially welcomed to Stellenbosch University last week those who could not understand Afrikaans could tune in to a translation on their cellphones and earphones.

The translation initiative was driven by the students' representative council after a student proposed it last year.

"We thought it was a great idea to celebrate the university's new policy of bilingualism, which was adopted last year," said Wimpie Greyvenstein, an SRC member and fourth-year engineering student.

For decades the University of Stellenbosch has grappled with the thorny issue of transformation, with the preservation of Afrikaans as the primary language of instruction at the heart of the strife.

Since 2011 the university has been trying to diversify its student body.

Last year, nearly half of all students were black. Their number is to increase significantly this year after the formal adoption of a policy of bilingual instruction. Already most post-graduate courses are presented in English.

Professor Arnold Schoonwinkel, vice-rector for learning and teaching, said translation services had been pivotal to the success of racial integration.

"There was this huge outcry when we started opening our doors to students from disadvantaged backgrounds. People feared that our standards would drop," he said.

"But the sceptics have been proved wrong because, since 2011, we have maintained our record as the South African university with the highest success rate - 85.9% - for undergraduate and postgraduate students."

"In 2011, when we started our translation services, 65% of all modules were taught in Afrikaans and 45% in English, but since then English modules have increased to 58%. We are aiming to increase this to 75% of all modules in both languages," he said.

Extra tutorials, in English and Afrikaans, are available to those who still need help.

He said a plan had to be put in place to facilitate faster transformation.

Latest figures from Wits University show that black students made up 77.5% in 2014.

The University of Cape Town confirmed its black intake was 44% in 2013, but did not supply figures for last year.