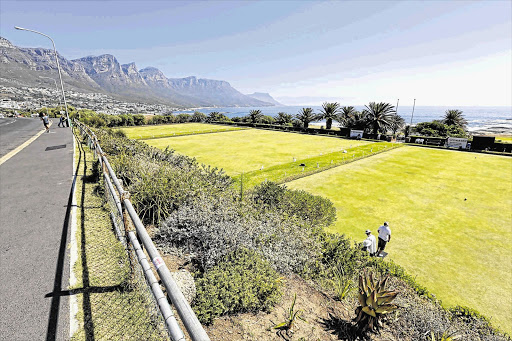 GREEN FOR NOW: The land on which the Glen Country Club and The Bungalow restaurant in Cape Town are located - some of the most expensive real estate in South Africa - is to be sold to developers
Image: ADRIAN DE KOCK

One of the most valuable pieces of land in Cape Town is to be sold for development, netting the city what experts say will be well over R100-million.

An initial proposal, issued for public comment, includes the possible sale of the garages and of the land on which the Glen Country Club and The Bungalow restaurant are located.

The development will probably comprise a three-level underground parking garage with 750 bays, and about 2750m² of commercial space, including an anchor retailer tenant. The Bungalow is likely to be the relocated.

Nielson said Clifton homeowners using the garages on the land had long been asking for a new parking development.

"The idea is that the existing garage will be replaced by underground garages."

The land, however, presented an opportunity for other development, Nielson said.

The city has been approached by a number of developers and has decided to ask the public to comment on the proposed sale and development.

The land is zoned for "mixed use" and rezoning will be required if the development is given the go-ahead.

Seeff estate agent Lance Cohen said the land would be sold for far more than the rumoured R100-million.

"I sold a piece of ground of 2500m² on Victoria Road, in Clifton. It had three old houses, which have since been demolished, and I sold it for R70-million," he said.

Chris Willemse, of the Camps Bay Residents' Association, which liaises with the Clifton Bungalow Owners' Association, said residents were "very circumspect of the city's intention to sell off every piece of public land it owned".

On its website, the city says that, since July 2014, it has sold 23 of its properties to private companies, trusts, individuals and state entities such as Eskom, realising more than R31-million.