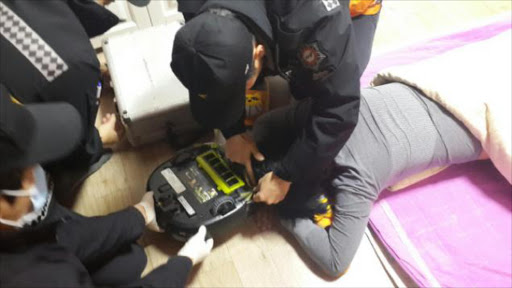 A robotic vacuum cleaner "attacked" a South Korean woman while she slept by attempting to suck up her hair.

The woman, a 52-year-old resident of Changwon, South Korea, who has not been named, was awoken by the pain and, unable to extricate herself from the robot, called the fire department for help.

She was eventually freed by paramedics, escaping serious injury but losing several strands of hair. It required two paramedics to remove her hair from the machine's nozzle, Korea Biz Wire reported.

The incident, which took place on January 3, highlighted the risk of this type of accident in South Korea, where sitting and sleeping on the floor is common practice.

The vacuum stopped running a minute after initially ingesting the woman's hair.

She was still unable to free herself from the vacuum and made a "desperate rescue request" call.

Robotic vacuum cleaners are equipped with sensors allowing them to clean surfaces by detecting dirt while avoiding obstacles such as stairs, people and cables - but not, seemingly, human hair that is still attached.