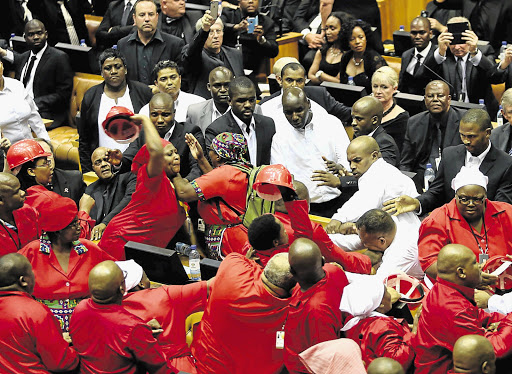 Security officers and EFF MPs scuffle during the State of the Nation address.
Image: ESA ALEXANDER

The State of the Nation address in parliament descended into chaos and violence last night.

In dramatic and historic scenes:

He outlined a series of measures to address the power crisis, including a R23-billion bailout for Eskom which, he said, had been ordered to switch from diesel to gas as a source of energy to cut costs.

He also announced radical land legislation, including an ownership ceiling of 12000ha per farmer, a proposal sure to be vigorously opposed in court by defenders of property rights enshrined in the constitution.

Foreigners will in future not be allowed to own land in South Africa. They will only be allowed long-term leases. Zuma said Rural Development and Land Affairs Minister Gugile Nkwinti's controversial plan to force farmers to share 50% of their land with farmworkers would go ahead.

Zuma said this year would mark the beginning of the first phase of broadband rollout, led by Telkom, which would focus on connecting government offices in eight district municipalities.

Earlier, EFF members interrupted Zuma just words into his speech, asking when was he going to pay back some of the public money spent on his Nkandla homestead.

"I'm not going to leave, chair," he shouted back.

Mbete called for parliament security. Attempts by about 24 EFF MPs to form a human shield around Malema failed as security officers - rumoured to include police - applied serious force to eject them. Blows were traded, with EFF MPs using their hard hats to attack security personnel.

None of the confrontation was broadcast on TV, with private channel eNCA saying parliament had not fed it any such footage.

Desks were overturned and several hard hats were left on the floor of the chamber.

EFF MP Bernard Joseph, a large man, fought back hard, requiring several men to carry him and Malema out.

Veteran MP and IFP leader Mangosuthu Buthelezi registered his disgust at the spectacle: "I think what has just happened is not what we as the majority of this house want to see . people indulging in [fisticuffs], tearing our country apart. What has happened is utter nonsense."

Thandi Modise, chairman of the National Council of Provinces, who was co-presiding with Speaker Mbete, strongly defended the use of physical force.

''Therefore, let's agree that such incidents will not happen again in our parliament," Modise said.

Malema told journalists outside the Assembly that he and his MPs had been manhandled by SAPS members belonging to the Presidential Protection Unit and not parliament security personnel.

He said he was unshaken and his party would remain a thorn in Zuma's side.

"It's a sad day that elected representatives, including women, can be beaten by police.

"We have almost seven members who are injured and all of them are encouraged to go consult and open [criminal cases].

"This is a direct threat to democracy, that those who don't agree with the state are subjected to the harsh treatment of the security institutions. Police are used to settle political differences.

"This has put our democracy in serious danger, but you must rest assured that this is just the beginning. We are continuing participating in this parliament until the executive takes this institution seriously.

''We are not going to stop demanding answers from No1 tsotsi. We will continue asking relevant questions, when is Zuma paying back the money," said Malema in his torn white vest.

The DA, which has always opposed the deployment of police in the debating chamber, walked out after Modise would not say whether the people who had removed the EFF MPs were indeed from the police.

"We will not be part of this joint sitting if the police were sent in," said the party's parliamentary leader Mmusi Maimane.

The UDM leader, Bantu Holomisa, said: "We are not going to be part of this, to endorse a police state here.''