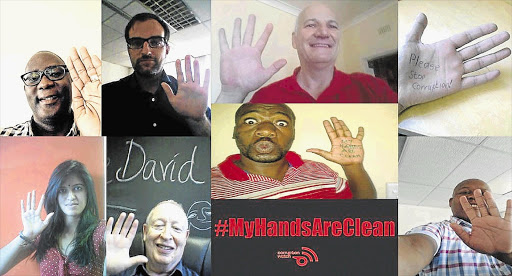 GIMME FIVE: Cosatu general secretary Zwelinzima Vavi, top left, and David Lewis, executive director of Corruption Watch, bottom second left, are among the South Africans who have taken up the My Hands Are Clean challenge on Twitter
Image: CORRUPTION WATCH/TWITTER

You might be wondering why so many hands are making their way onto your social media timelines.

It's a bid to trample corruption. South Africans have been encouraged to join the new Corruption Watch campaign known as My Hands Are Clean.

The campaign, which went live yesterday, calls for people to post selfies showing a raised hand, and a hashtag, and to nominate friends to do the same within 24 hours.

The executive director of Corruption Watch, David Lewis, said the campaign was aimed especially at young people, encouraging them to look at how corruption affected them.

"We're calling on the youth to commit to take responsibility for their own actions, as well as encourage others to come clean with any kind of corruption they may have committed."

A report released by the advocacy group this week says that corruption complaints have increased by 17% since 2012 - 44% of them from Gauteng.

The abuse of power came in as the prime form of corruption, making up 41% of reports made to Corruption Watch last year.

Lewis said corruption eroded citizens' trust in public institutions and government entities, especially those that have direct contact with the public.

The My Hands Are Clean campaign not only trended around the country yesterday but went as far as Russia and Germany.

Said Dembovsky: "The moment people stop paying bribes, whether it is to get out of something they did or didn't do, is the moment they start curbing corruption. If you pay a bribe and you weren't drinking, the same traffic officer will take a bribe from a drunk driver who, in turn, puts your life in danger on the road."

Vavi shared a similar sentiment, adding that corruption was at a "worrying" level.

"We need to start collaborating at all positions of society because if we freely participate in small corruption, it leads the way to bigger corruption," said Vavi.