'I fled civil war, but am yet to find peace' 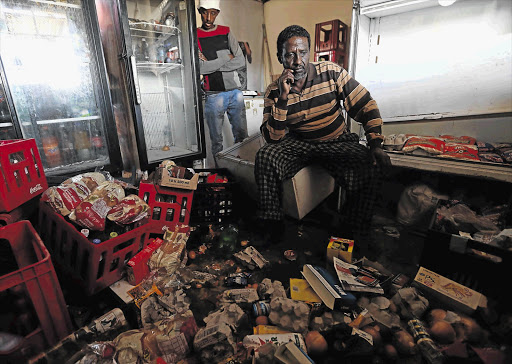 The two people killed were allegedly shot by "foreigners" during the rampage. One shopkeeper said stock worth R70000 had been looted from his shop, in Marikana, while police looked on.

Western Cape police spokesman Lieutenant-Colonel Andre Traut said: "Reports of two males who were allegedly shot by foreign shopkeepers were received; however, the victims are yet to be traced. Reports also suggest that the alleged suspects fled the scene."

Traut said police had been deployed and arrested looters.

Some of the looters were among the throngs who descended on Bellville Magistrate's Court earlier yesterday to support Ses'Khona leaders Andile Lili, Loyiso Nkohla and seven others on trial for contravening the Aviation Act.

The group clashed with Somali shop owners in Bellville CBD and pelted them with stones and bottles. A heavy police contingent was called to disperse the crowds.

The fight began after a Somali apparently struck a member of the movement with a car and drove away.

"About 200 people arrived at my shop around 4.30pm and broke the burglar gate and started looting my shop," said Abdurrahman Mohamed, who owns Bis Millah shop in Marikana informal settlement.

"They took everything, meat, cigarettes and drinks. The stuff was worth more than R70000."

Mohamed said it was the third time his business had been looted since he arrived in South Africa in 2010.

"I ran away from a civil war at home but I am yet to find peace. I am working hard to feed my children," he said.

His shop is one of several in the area owned by Somalis that were ransacked. Residents in the informal settlement were seen carrying crates of soft drinks, plastic bags full of groceries and DVD players.

A few police officers came to monitor the situation but residents continued to loot undeterred. They also used burning tyres to close the road and threatened journalists.

One of the residents, Thozama Botile, shouted: "We are going to attack your brothers in the townships. You cannot come here and knock us with cars and beat us up. They must go."

Lili condemned the looting, but said, "Somalis also need to respect the laws of the country.

"Somalis provoked our members and attacked them in Bellville - some of them got injured.

"They drive around without driver's licences and one of them knocked one of our members. Instead of respecting the laws, they still went on and attacked our members."

Lili, Nkohla and seven others were found guilty earlier this month. They were arrested in June 2013 after they strewed human waste at the airport in protest against the portable toilets the City of Cape Town provided at informal settlements. Sentencing procedures were postponed until April 16.