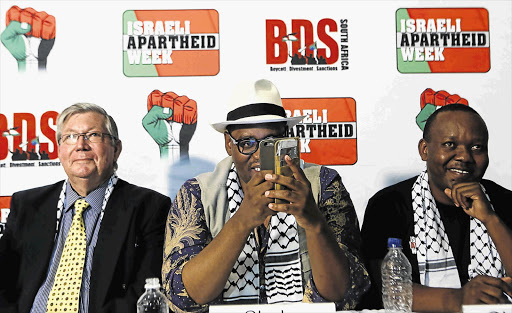 Thirty years ago, members of the Sisulu and Chikane clans were arrested for plotting the downfall of the apartheid regime.

Now, a new generation of the two families is once more joined at the hip and fighting injustice.

On February 18, 1985, police arrested United Democratic Front leaders Albertina Sisulu and Frank Chikane in what was to be known as the Pietermaritzburg Treason Trial. The charges were dropped in December that year.

Yesterday, Shaka Sisulu, grandson of stalwarts Albertina and Walter Sisulu, and Obakeng Chikane, son of Reverend Frank Chikane, joined forces to highlight the plight of the Palestine people, as part of the Israeli Apartheid Week.

Before then, Shaka and Obakeng went to Soweto to quell tensions between foreign shop-owners and indigenous traders.

Speaking on the sidelines of the launch of Israeli Apartheid Week at the historic Liliesleaf Farm in Rivonia, northern Johannesburg, Obakeng said: "[Political consciousness] is very low. We seem to have arrived at a point where we have achieved what we have achieved and now we no longer look back.

"South Africa must re-awake and claim its rightful place in the world because we are not where we are because of ourselves."

The young Chikane sits on the regional executive committee of the ANC Youth League in Johannesburg. But, he said, his political involvement was "12 years late".

He said: "In 1997, my father took me to an ANC youth league rally. I was very hesitant about entering the political space and he had always had this concern that I was not as involved as he would have expected. So he asked me: 'Who do you expect to lead this organisation if you do not want to join it?' "

Said the group: "When we use the word 'apartheid' to describe Israel we say it with a hard heart, sadness, anger and impatience.

"But we don't say it maliciously, irresponsibly or carelessly. We use the word 'apartheid' because several of our mothers, fathers and elders have been to Palestine-Israel and have reported that the situation is one of apartheid."

Israel Apartheid Week - beginning today and ending on Sunday - is endorsed by 82 local organisations, including the ANC, Cosatu, SACP, and Boycott, Divestment and Sanctions against Israel in South Africa.

On Saturday, the initiative will again focus on boycotting Woolworths.

The Boycott, Divestment and Sanctions group claims the company has lost R30-million since its campaign began.