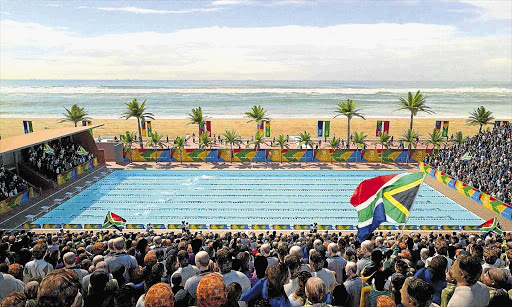 This is what the swimming venue for the 2022 Commonwealth Games, to be built at the Rachel Finlayson tidal pool, will look like
Image: SASCOC

A South African-raised campaign adviser and filmmaker, who has worked on 13 bids for major sports events, says Durban 2022 has a strong bid.

Caroline Rowland, whose official film of the 2012 London Olympics received an Emmy nomination, flies into South Africa on Thursday hoping to work on Durban's bid for the Commonwealth Games.

"It's a great city and it's a really good bid," she said.

Rowland, who grew up in Welkom and studied at Rhodes University, said it was critical to focus on the legacy of the Games.

"Glasgow's legacy was very clear from the outset," she said.