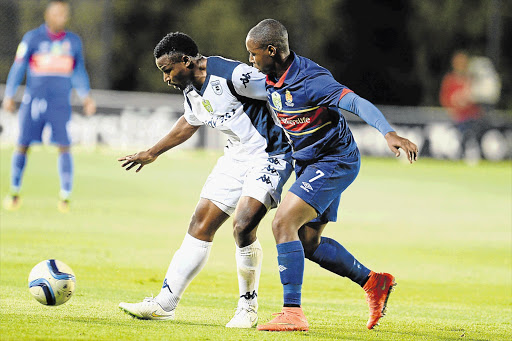 Bidvest Wits proved the more studious in the battle of the tertiary institutions last night, out-manoeuvring the University of Pretoria 3-0 in their Nedbank Cup last-16 contest at Bidvest Stadium.

Sixteen-year-old Under-17 international Liam Jordan, son of the late former Manning Rangers striker Keryn Jordan, made his Wits debut as an 83rd-minute substitute for Vilakazi.

Tuks coach Sammy Troughton came to Johannesburg with an attacking mentality, but his side never found their rhythm. The two teams played crisp, clean, quick football in an entertaining cup tie.

The Clever Boys - who also possess the greater playing firepower - were crisper.

They had hoped to at least win the Nedbank Cup but lost 3-1 to Orlando Pirates in the final at Moses Mabhida Stadium in Durban.

With Kaizer Chiefs and Mamelodi Sundowns again left to fight it out in the league at the death of this season, Wits are chasing South Africa's version of the FA Cup again. The quarterfinalists look a decent bet to go further than in the last campaign.

Both coaches opted for three forwards. Wits boss Gavin Hunt employed Vilakazi, Chris Katongo and Botes in a familiar 4-3-3 formation for the Students.

Troughton had Thabo Mosadi, Geofrey Massa and Thabo Mnyamane in an even more adventurous 3-4-3 formation.

Both sides spent the early stages sizing each other up - there were no shots on target in the opening quarter.

In the 25th minute a forceful run by Papy Faty did pry space for Wits, with the midfielder playing Vilakazi through. Vilakazi was dispossessed and Faty struck the loose ball over the bar.

They showed signs of doing it but Wits countered by opening the scoring when, from a free-kick, an attempted clearance landed for Kwakman to volley in off the right upright from the left of the area.

Massa earned Tuks' first real chance, with the Ugandan's header being pushed for a corner by Moeneeb Josephs. The second half started more like the tasty dish the first had offered to serve up. Vilakazi started beating players for Wits down the right.

On a Clever Boys' counter-attack Phumlani Ntshangase found Jabulani Shongwe free to advance down the left. Shongwe crossed perfectly for Vilakazi to tap in a volley from 3m.

Botes added a third with a sweetly struck left-footed shot from a metre outside the area into stranded goalkeeper Washington Arubi's top-right corner.