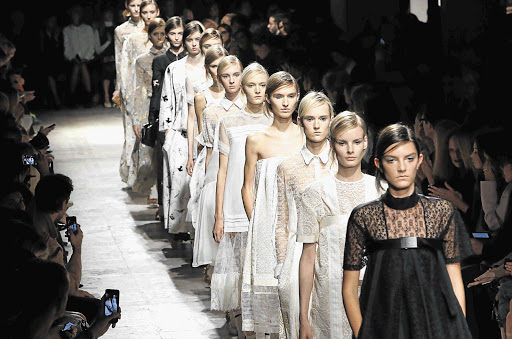 WAIFS: Models show clothes by Italian designer Alessandro Dell'Acqua at Paris Fashion Week. The French government wants models to prove they are within a healthy weight range, saying they influence the body aesthetic of girls at risk of anorexia
Image: CHARLES PLATIAU/REUTERS

The French government has backed parliamentary plans to introduce fines and prison sentences on anyone employing skinny, undernourished fashion models who "glorify anorexia".

Olivier Véran, a Socialist MP, tabled two amendments to recent health reforms to punish those who promote the painfully thin as fashionable.

The first would ban modelling agencies from using "extremely thin young women whose weight could put them in danger".

It would oblige models to provide medical certificates showing their body mass index. Any agency that took on someone whose BMI was below an as yet unspecified minimum would face a maximum six-month prison term and a à75000 (R988000) fine.

"It's intolerable to promote malnutrition and to commercially exploit people who are endangering their own health," Véran, a neurologist at the University Hospital of Grenoble, told Le Parisien.

The second amendment would make it a criminal offence to "glorify excessive skinniness" and create powers to shut down websites that "promote anorexia".

Some websites claim to offer beauty tips to girls as young as 12, including starving themselves to create a 15cm "thigh gap".

Marisol Touraine, the French health minister, said on Monday she backed the amendments.

"When you are a model, you must eat and take care of your health. This is an important message to young girls, girls who see in these models an aesthetic ideal. This is a good way to proceed."

But it seems unlikely that a similar bill would be necessary in South Africa. Two of the biggest modelling agencies, Ice Models and Boss Models, said our models were far healthier.

Ice Models managing director James Kelly said: "I don't believe [South Africa would follow suit]. The Paris market has always been notorious for seeking very thin models, which is why very few South African girls have succeeded there. South African models are known to be more curvy, fuller figured and sporty in comparison."

Boss Models director Linda Bruchhausen said: "We prefer our models slender, toned, and [to] develop a lifestyle that is healthy and easy to maintain.

"This must include a balanced diet with small dinners, avoiding alcohol, and including exercise into their daily routine - such as yoga, Pilates and running."