'Rhodes rage' shifts up a gear 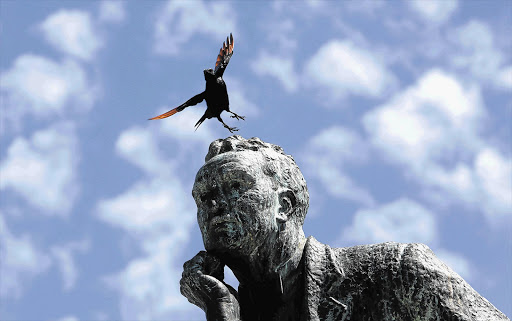 WOBBLING PERCH: The much-debated statue of Cecil John Rhodes at the University of Cape Town, which the vice-chancellor believes should be moved to a less prominent spot
Image: ESA ALEXANDER

After a week of student protest, the UCT vice-chancellor has given the clearest indication yet that he believes the controversial statue of Rhodes should be moved from its "pride of place, at the focal point of the campus".

But this will do little to quell the spread of protests against lack of transformation to other campuses.

Using the hashtag #Rhodes SoWhite, students in Grahamstown yesterday staged a demonstration about the slow pace of transformation and lack of inclusiveness at Rhodes University.

The chairman of the Higher Education Transformation Network, Lucky Thekisho, said racial equality was an issue at other universities.

He singled out the North West and Stellenbosch universities. The three different campuses of North West University needed to be unified so that resources could be more equally spread, while student initiations were a racially divisive issue at Stellenbosch, he said.

Professor Jonathan Jansen, chancellor of the University of the Free State, said UCT and Rhodes were going through now what his institution had experienced when it changed its logo in 2011. Protests from the Afrikaans community had led to UFS setting up a name-changing committee.

Both the UJ and UFS committees comprise students and management, who consult regularly on transformation on campus.

UCT students began protesting 10 days ago after political science student Chumani Maxwele threw a bucket of faeces over the statue of Rhodes. Maxwele has told The Times he wants to end the division between black and white students at UCT and to eradicate the eurocentricity he claims is still rampant at the institution.

In an attempt to address the protests, vice-chancellor Max Price yesterday announced a fast-track plan for the controversial statue.

Price said he was in favour of the relocation of the statue, which he described as a symbol of UCT's colonial past, and announced intensified student participation in the process in the next four weeks.

Price said he did not think the statue should be destroyed or hidden. "I just think it should not be there - it should be moved. This will not compromise our ability to record and debate the role Rhodes played in the city's and continent's history."

"The letter from the chancellor is not of interest to us. We want a response from the institution's senior management. We are still going forward with a march on Friday. We don't care what they do with the statue. We just don't want it there," he told The Times.

Nine former presidents of the UCT SRC have written an open letter to the university council expressing their support for the removal of the statue.

"We wish to remind the university that this debate is not new . We reject, as revisionist, the idea that removing the statue would 'erase' Rhodes from the university's history," they said.

But Heritage Western Cape spokesman Andew Hall said because the statue was an "icon of national heritage", input was needed from all stakeholders before it could be discussed by the heritage committee.

"It cannot just be broken down. The university will have to get a permit before making any changes to it and they will have to recommend what needs to happen with the statue. Without appeals, the process could take 30 days," Hall said.

DA federal chairman Wilmot James, a former dean of humanities at UCT, said students should emulate the principles of Nelson Mandela, who rededicated the 1820 Settlers Monument in Grahamstown rather than tearing it down.

"Cecil John Rhodes did awful things as part of his colonial project. But through forward thinking by later generations good was able to come, specifically in the area of education," he said.

At Rhodes University, a meeting between students and management will be held tonight. Since Tuesday, students of all races have gathered to share their experiences of the lack of transformation at the Grahamstown institution.

"There was a feeling that we need to challenge the apathy at Rhodes because it is a very comfortable space for privileged students," said Joseph Coetzee, one of the protest organisers.

SRC secretary-general Abi Butcher said though the hashtag #RhodesSoWhite was well-intentioned, it became a way to vent anger, generalisations and hate speech.

"#RhodesSoWhite that white people are too blind to understand the significance of why we are calling out white privilege," said another.

On Twitter and Facebook students expressed their views on white privilege, racism and the lack of transformation on campus.

Rhodes University history lecturer and transformation activist Nomalanga Mkhize said: "Students want to see universities take a genuine lead in transformation and want to feel they can believe in the university as a moral entity."