Carnage on the coast as Easter holiday death toll hits 27 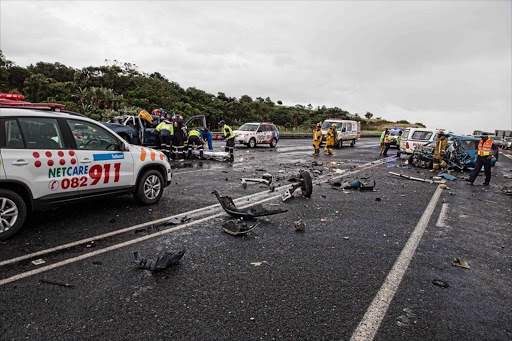 The remains of two vehicles that collided head-on on Good Friday on the R61 at the Shelly Beach off-ramp in KwaZulu-Natal. At least six people were killed.
Image: NETCARE 911

KwaZulu-Natal police are battling to identify six people who died in an accident on Good Friday at Shelly Beach near Port Shepstone on the KwaZulu-Natal south coast.

A three-year-old girl, two teens and three adults died when the bakkie in which they were travelling collided head-on with a small vehicle on the R61 at the Shelly Beach off-ramp

An occupant in the smaller car, believed to be from Limpopo, also died.

One man survived the horror crash but the impact was such that emergency workers could not tell in which of the two vehicles he had been travelling. He is now fighting for his life in hospital.

Provincial police spokesman Major General Thulani Zwane said those in the bakkie were believed to be from Shakaskraal on the KwaZulu-Natal north coast.

Debris from the accident and the twisted frames of the vehicles were spread over a large area, with some occupants still trapped in the wreckage.

The highest number of deaths came from the Western Cape where 14 people died, government officials said yesterday. Of those, eight were pedestrians killed in separate incidents across the province.

In the Northern Cape there were 45 accidents, with two deaths and scores of people injured. Two deaths were recorded on Eastern Cape roads.

In another accident on Friday, 10 people were killed on the N1 at Boekenhout, about 30km from the Kranskop toll plaza near Mokopane in Limpopo.

A Toyota Quantum and a Colt bakkie collided head-on, said Simon Zwane, spokesman for the Road Traffic Management Corporation. According to ER24, paramedics arrived to find both vehicles in flames in the road, with members of a nearby community attempting to extinguish the blaze.

Two people were trapped in the bakkie and eight others had been flung from the vehicle.

"The driver of the Colt was on the wrong side of the road. He was overtaking when it wasn't safe," said Zwane.

"The same thing happened in KwaZulu-Natal," Zwane said, referring to the crash near Shelly Beach. "Six people were killed when a driver also tried to overtake when it wasn't safe."

Rob Mackenzie, spokesman for KwaZulu-Natal Emergency Medical Services, said three people were killed and 12 others injured in a taxi accident on Posseld Road in Clermont near Pinetown in Durban.

Last year 148 people were killed on the country's roads during the Easter weekend. KwaZulu-Natal had the highest number of fatalities with 39 deaths, followed by Limpopo (23) and Gauteng (22). This was down from 201 fatalities over the same period in 2013.

Zwane said 300 people were arrested for drunk driving, speeding and negligent driving since the launch of the Department of Transport's Easter blitz this year.

''These people 'tata ma chance' and think they won't get caught," he said. "We even arrested a traffic officer who tried to bribe an officer from our anti-corruption unit for speeding. They think Easter is time to make some extra money."

In Gauteng, chief superintendent Wayne Minnaar of the Johannesburg Metro Police, said 21 people were arrested for speeding on the Golden Highway near Lenasia. "A woman from Lenasia was arrested for driving 128km/h in a 60km/h zone," he said.