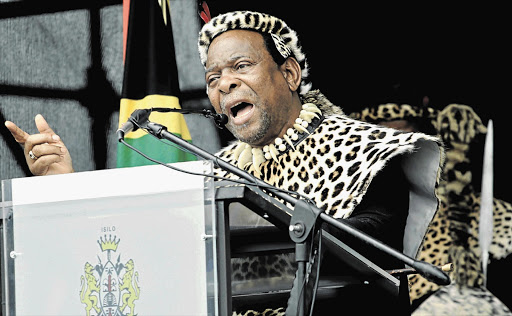 The South African Human Rights Commission (HRC) wants King Goodwill Zwelithini to confirm that the xenophobic attacks are "not being undertaken in his name or by his direction”.

In a statement released on Friday‚ the HRC it had noted comments by the Zulu monarch disassociating himself from the actions of people involved in the recent attacks.

The commission “is investigating complaints regarding such alleged comments” — one of which would be the charges of hate speech laid against Zwelithini by Tim Flack‚ spokesman for the SA National Defence Force Union‚ this week.

Flack said: "The king needs to account and be charged for inciting this violence."

Speaking in Pongola last month‚ Zwelithini called foreigners “lice” and said: "We ask that immigrants take their bags and go where they come from."

The HRC on Friday also expressed regret that government had not responded to “the findings and recommendations by the commission in its 2009 report on xenophobic attacks which drew special emphasis on the need for early warning systems‚ heightened protection of foreign nationals‚ reintegration‚ wide education programme‚ access to justice and reparation based on the events of 2008”.

Ignoring these lessons‚ the HRC said‚ could lead to “such conduct degenerating into other opportunistic attacks on fellow citizens that could weaken and indeed reverse democratic gains‚ the economy‚ South Africa’s standing internationally most importantly basic respect for human rights that South Africa has achieved so far”.

“The commission reminds South Africans that our Constitution protects the human rights of all foreign nationals‚ with or without resident permits‚ residing within the borders of the Republic‚” the statement read. — RDM News Wire