Transcript of conversation between Christopher Panayiotou and bouncer Thando Siyoli 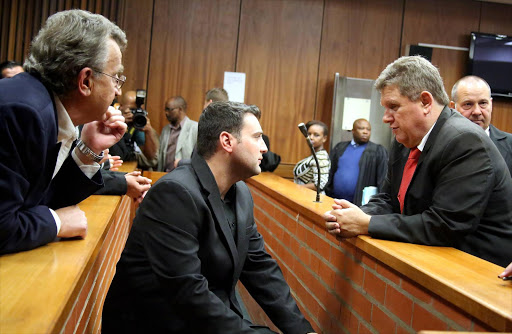 Murder accused Christopher Panayiotou (CP) and Thando Siyoli (TS) met on April 29 at an unknown location. Siyoli, believed to have been a bouncer at Panayiotou’s Infinity Bar, has turned state witness.

The edited conversation that follows comes from a sting operation set up by the police to trap Panayiotou:

TS: — Babalwa called me and said the police was there at my house. Everything is changing now.

CP: But why are the police after you?

TS: I don’t know. I think here is an informer somewhere, somehow.

CP: Did these guys blit [talk]?

CP: Did they tell anything?

TS: No, even them they are on the run.

TS: I told them they must not be here.

CP: Where they going to?

TS: They didn’t tell me. I changed my simcard.

CP: Yes, but you need to change it again now.

TS: I’m going to call you on my new number.

CP: No, you are not. You just missed-call me. Don’t phone me or SMS me.

TS: Hey, this thing I didn’t see it was going to be like this.

TS: What is this?

CP: Plus minus five [the transcript makes reference to R5000]. Where are you going to now?

CP: Yes, but why did they say to you when they fetched you the other day.

TS: They fetched me and then they asked me questions.

CP: Tell me, did they ask you if you were involved?

CP: So what did you say?

TS: Those are the stupid ones.

CP: So where did they take you?

TS: They took me, me the police station and there they took my statement, but in my mind ... You mos told me we will be investigated.

TS: So I was ready for that, but I was not ready.

CP: So why are you running away?

TS: They keep coming to my house.

CP: Did you take your phone anywhere?

CP: No, your other phone.

TS: I destroyed it.

TS: I told them to destroy it and then I destroyed it.

CP: Yeah, and the sim-card and everything. Did you throw it away?

CP: OK. So they didn’t ask anything about me?

CP: Or if I’m involved with anything?

CP: Yes, they have asked me, but now, but now you’ve been phoning me all day and they have been tracing my phone.

TS: The thing is, who could I call? I had no one to call.

CP: I know, but now you have to destroy that phone. I have to tell them that you phoned me otherwise they are going to think that I am involved.

CP: So you need to destroy that phone now. The phone and the sim-card my boy, both.

The transcript states that Panayiotou turns to Siyoli who is seated behind him in the vehicle and searches him for a wire.

TS: Even me I’m not trusting you now, just the thing of the police that are coming to my house.

CP: I swear on my life I didn’t say anything, but they are obviously seeing who I have been phoning. They are tapping my phone and my every number I phone, they are investigating my family too. Somebody said something.

CP: But that’s what I said to you. It became kidnapping and a murder instead of just making it a robbery outside the house.

CP: They went to search you house says Siyanda.

TS: Siyanda says so? You see.

CP: But there’s nothing there about it so stop stressing.

TS: You know why I’m actually stressing. I’m not safe anymore, because I have to run away even from Sizwe because I told you mos what Sizwe said. That money was too little because now they running away too.

CP: Yes, but it is because of them, Thando. They made it the way they did. They made it so big, but they have run away hey? How many of them?

CP: Is it black guys or coloured guys.

TS: Sizwe is a black guy.

CP: And the others?

TS: I don’t know if hmm … the others, but I know Sizwe. I was communicating with Sizwe.

TS: But I don’t know if Sizwe was walking alone.

CP: OK. Listen to me. I am going to report that you phoned me now.

TS: And then you going to call me?

CP: No, but you are going to destroy the phone.

TS: So you are going to give them my number?

CP: Hmm, yes, I have to tell them. They investigating me. If I lie to them they going to take me in. So I’m telling you. In half an hour I am going to phone the investigating officer. He was at my house now now, that’s why I can’t talk to you all the time, and my uncle is all around me. So I’m going to tell them ... that you came to see me wanting to borrow money because people took you for questioning for steroids. You need to go and hide in Jeffreys for a while and keep quiet.

TS: And what about the rent for the gym?

CP: Yes, but I can’t do anything because I’m under investigation so I can’t just give over money all the time, so don’t worry me and Siyanda will talk.

CP: OK. Are you going to hide out that side in Jeffreys.

TS: Yeah I’m going to stay a while there or maybe some.

CP: Yeah, I am going to be OK as long as they never know about us, Thando. I never ever, I only ever helped you with the gym, I never did anything with you. I’ll sort out your family, you hide low OK. You need to be gone for a few months till this thing calms down.

TS: If I need you, I will missed-call you?

CP: No! Not on this number.

TS: On what number?

CP: You going to missed-call me once and then you are going to wait until I get another phone and sim-card.

CP: Ok. All right. Ok. There is about five there you sort yourself out.

CP: OK, because I am all out now. This thing has cost me a lot of money. The family is also looking at me.

TS: This thing is not right now.

CP: No, these boys made it big. I told you to let them do it outside the house and take the bags and the rings and then they didn’t take the watch or anything.

CP: They just left everything there, you see, so it looks like a hit now. So they are after me, and that’s why I can’t just meet you in front of people like this Thando.

CP: OK. Don’t phone me and don’t sms, they are watching the SMSes because you said.

TS: Ja, but I SMS you and you don’t reply, me at the other side I’m hiding and then.

CP: No, but you need to give me time. So from now you just give me one missed-call on this number first time and never again. Don’t ever phone me or sms me to this number because they are listening to us.

CP: Well yes, but I put it off. When you are talking on the phone, they are listening that’s why I have to report this now. OK. All right. I am going to say you are going to East London. OK. OK cheers.

TS: So I need to missed-call you.

CP: Yes, but then you wait for me to phone you back.