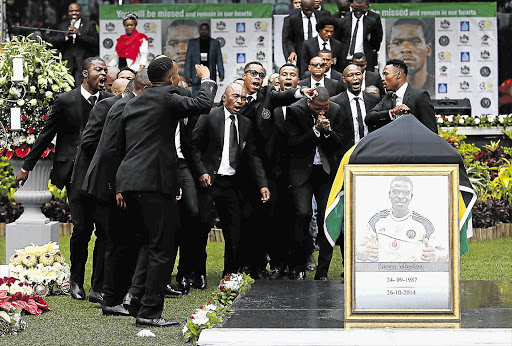 Orlando Pirates team members sing and dance next to the coffin of Senzo Meyiwa at his funeral at Moses Mabhida Stadium, Durban yesterday
Image: ALON SKUY

A police captain investigating the Senzo Meyiwa murder case has allegedly pulled out of the probe after her recommendation that those present in the house on the night of the murder, including Kelly Khumalo, be charged and arrested for lying to the police.

According to a report on Monday, Captain Joyce Buthelezi made recommendations to a committee dealing with the case that police arrest and charge everyone in the house on the night of the murder with perjury and defeating the ends of justice.

When the committee overseeing the probe allegedly rejected one of her key recommendations, she pulled out of the investigation, according to a Sunday World report.

She subsequently allegedly received death threats after making the recommendation.

According to the report, national police spokesperson Lieutenant general Solomon Makgale confirmed that Captain Buthelezi has left the team, but said no one received death threats.

The Orlando Pirates and Bafana Bafana goalkeeper and captain, Meyiwa, was shot and killed in what appeared to be a botched armed robbery at his girlfriend Kelly Khumalo's house in Spruitview on the East Rand last October.

Those present (witnesses) in the house on the night of the murder are Khumalo and her sister Zandi, the son of music producer Chicco Twala, Longwe, and the goalkeeper's friends Tumelo Madladla and Mthokozisi Twala.