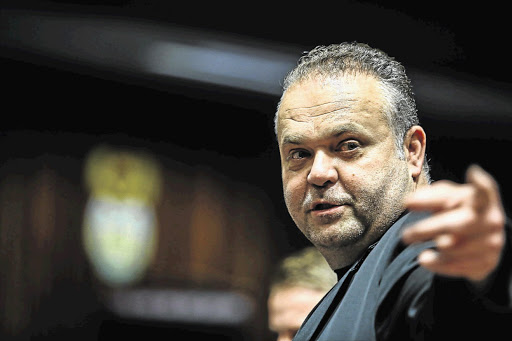 “The…  DCS has thwarted apparent escape plans by inmates, that include Radovan Krejcir, at Zonderwater Correctional Centre, when it raided a number of cells,” said departmental spokesperson Manelisi Wolela in a statement.

“A number of illegal items were discovered”.

The Sunday Independent reported that amongst the items found in Krejcir’s cell were a pistol, ammunition, a knife, an item that looked like a Taser, a pepper spray gun, screwdriver steel blades, 10 cellphones, a memory stick and a diary which contained the names of witnesses and investigators in his cases.

The newspaper quoted a source as saying that the raid took place on Saturday, after police had received information from an informant that Krejcir was planning to escape before his next court appearance in October.

Wolela said that various police and prison investigations into the matter were now under way.

Earlier this month, the first conviction against Krejcir was obtained when he was found guilty of attempted murder, kidnapping and dealing in drugs, related to the kidnapping and torture of Bheki Lukhele, whose brother, Doctor, had allegedly disappeared with 25kg of tik. Doctor worked at a cargo company at OR Tambo International Airport.

According to previous testimony, Doctor disappeared with tik he was supposed to get to Australia.  Five others were also convicted on various charges related to the crime.

Sentencing in the matter was due to be heard on October 12.

Krejcir, who has been charged with a number of cases, has been behind bars since November 2012.

On October 16, Krejcir is due to hear whether he will be granted bail in another case in which he and four others were charged with the murder of Sam Issa, who died in a hail of bullets at an intersection in Bedfordview.

On the same day the Palm Ridge Magistrate's Court is expected to hear another case against Krejcir and several others. This involves the murder of debt collector Phumlani Ncube, who was gunned down last year, and the attempted murder of Colonel Nkosana Ximba and investigator Paul O’Sullivan – both of whom had been investigating Krejcir at the time.

Meanwhile, the Sunday Times reported last month that two new criminal cases were lodged against Krejcir after a previous raid on his cell in June uncovered evidence of seemingly corrupt connections he had with officials.

“There was a high-level investigation into Krejcir’s extensive network of police contacts,” police spokesperson Lieutenant Colonel Solomon Magkale confirmed at the time.

The newly-opened cases apparently include charges of interfering with a police investigation and defeating the ends of justice.

Previously, News24 reported how Krejcir derided his conviction in the Bheki Lukhele case, telling journalists as he walked down to the holding cells that "the lies and the hate won over the truth and the love".