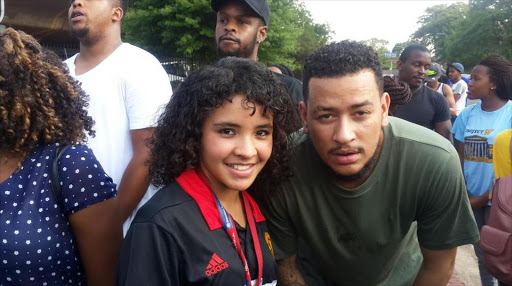 Raeesah Daniels with AKA.
Image: Via Raeesah's Twitter page

Singer and songwriter Simphiwe Dana and rapper AKA have shown their support for protesting Witwatersrand University students by joining them outside the Wits Medical School and spending time with them before heading back to the main campus where Dana was expected to perform.

The students are protesting against the 10.5% increase in fees.

The musicians joined the students outside the medical school and marched back to the main campus with them.

They are waiting to hear the outcome of Higher Education Minister Blade Nzimande's meeting with university vice chancellors held earlier on Tuesday.

The meeting, held between 11:00 and 13:00 according to Wits spokesperson Shirona Patel, was about the student fee protests that have sprung up at universities across the country.

Nzimande is expected to address media in Cape Town later on Tuesday.

Police had earlier threatened to move students by force from York Road outside the medical school. Students disrupted traffic and threatened journalists who they said were giving negative coverage on the protests. Only ambulances were allowed to enter the medical campus.

Patel told News24 that exams planned at the medical school on Tuesday had to be cancelled and rescheduled because of the protests.

A protest is planned by students at the University of Pretoria on Wednesday.

In an interview on Tuesday, ANC Youth League president Collen Maine told News24: "If the minister [Nzimande] cared enough he would have dealt with these issues [the protests] just after Wits because this was an indication that more was coming.

"We need an indication from him as a minister [on] whether he can clearly render issues of higher education or not. If he cannot he must say that to the president [Jacob Zuma] and then the president must assist students of this country by placing somebody who will do that."

Maine said Nzimande should have gone to Wits to speak to the students himself to inform them on how he would intervene.

"All of us can make noise about it saying we support the struggle but ultimately... there is a problem in the authority," he said, referring to Nzimande and his department.

"So we must just be told if there is a capacity to render issues of higher education."

During a media briefing on Monday, Nzimande said the student protests were not a national crisis and could be resolved.

But Maine disagreed, stating there was a crisis.

We here to stand with the students ✊   pic.twitter.com/1Ffqtb2cOm

On my way to WITS to stand in solidarity with the students.

I believe that education is a basic human right and I support the movement, but it's my right to exercise SILENCE for my own reasons.