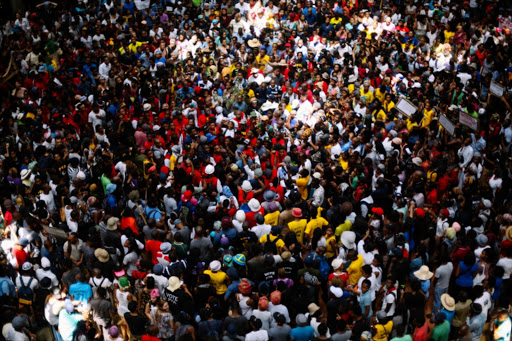 Wits students during a protest over the increase of tuition fees on October 19, 2015 in Johannesburg, South Africa. Wits students continued to protest as they waited for the university's council to meet with them to give feedback on the proposed 2016 fee hike. File photo.
Image: Gallo Images / Nicholas Rawhani

As Higher Education and Training Minister Blade Nzimande meets with vice-chancellors on Tuesday, students from more institutions have joined in nationwide protests over fee increases.

It was unclear when Nzimande, who is also the general secretary of the SA Community Party, would address the media.

Nzimande had previously said the student protests at several universities was not a "national crisis".

A protest at the University of the Witwatersrand over proposed free increases for 2016 continued on Tuesday, leading to the postponement of exams at the university's medical campus.

The protests flared up last week following the university's announcement that fees would be increased by 10.5% to account for rising costs and inflation.

Wits spokesperson Shirona Patel said students protesting outside the Wits Medical School on Tuesday were expected to march back to the main campus later to await the outcome of Nzimande's meeting.

On Monday, protesters also targeted motorists on roads near the university.

All activities at UCT had also been suspended. Students began blocking entrances to the institution on Monday morning, in protest against a planned 10.3% increase.

The university was later granted a temporary interdict from the Western Cape High Court against the protesting students.

On Monday, the university's Faculty of Commerce Associate Professor Peter Ouwehand was recorded referring to students as "selfish fucking cunts".

He told News24 later that while he had apologised for the incident, he would most likely "do it again" because he gets angry easily.

One person was reportedly injured in the incident.

This prompted a call from Rhodes vice chancellor Dr Sizwe Mabizela for students to return to the campus where they were "protected under Rhodes University jurisdiction".

Mabizela also called on police to avoid using force, but the police responded that they had used the "minimum amount of force that could legitimately be used" to diffuse the situation.

Protesting Rhodes students earlier on Monday abandoned talks with Mabizela after no agreement was reached on a decrease in students' Minimum Initial Payment (MIP) before registration.

Students are demanding a 10% MIP and the lowering of fees in general. The university is offering 20% and an extended payment deadline.

At Stellenbosch on Monday, students staged a sit-in at the university's Admin B building, dubbed "Winnie Mandela House" preventing staff from leaving.

University spokesperson Martin Viljoen told News24 at the time that between 30 and 40 students had occupied the building since Monday afternoon in protest against student fee increases. He said it was not clear who had arranged the sit-in.

Officials at Fort Hare University in the Eastern Cape also confirmed that its students were protesting.

Spokesperson Zintle Filtane told News24 students had gathered at the Alice campus ahead of a meeting between the SRC and management scheduled for 14:00.

Filtane said that as far as she knew, there was no damage to property or injuries at the university.

A mass meeting was also taking place at CPUT's Cape Town campus on Tuesday, with the institution's spokesperson Lauren Kansley saying acting vice chancellor Mikhail Mabuza had been consulting with students since early in the morning.

“A memorandum is expected to be handed over later today, so until then their demands cannot yet be confirmed,” she said.

Security was beefed up at the University of Pretoria's Hatfield campus as the institution braced itself for a protest on Tuesday.

Guards at the gate interrogated motorists entering the campus without access cards. Visitors were escorted to their respected venues.

While some students attended lectures as normal, student leaders were hard at work planning the protest.

A representative of the protestors, who were calling themselves @TuksUprising, said they would not back down.

"We are fighting against the planned increment for registration. We are calling on the university to abolish the current proposal and not to come up with a new one.

"We are currently mobilising students and come Wednesday, there will be mass action," said the representative, who asked to remain anonymous.

University spokesperson Anna-Retha Bouwer said the university had not received a formal notification of any planned student protest.

"The university is currently in discussions with the Student Representative Council on fees and related matters. Constructive engagement will continue," she said.

ANC Youth League president Collen Maine told News24 in an exclusive interview on Tuesday that Nzimande and his department were to blame for the wave of student protests.

"If the minister cared enough he would have dealt with these issues just after Wits because this was an indication that more was coming," said Maine.

"We need an indication from him as a minister whether he can clearly render issues of higher education or not. If he cannot he must say that to the president and then the president must assist students of this country by placing somebody who will do that."

Nzimande admitted on Monday that the current situation was not ideal but reiterated that it could not be classified as a crisis. He, however, also admitted that higher education fees in South Africa were exorbitant.

"It is a challenge, but I wouldn't call it a crisis. I am very sympathetic to what the students are saying. We are aware that university education is expensive and that something needs to be done," he said.