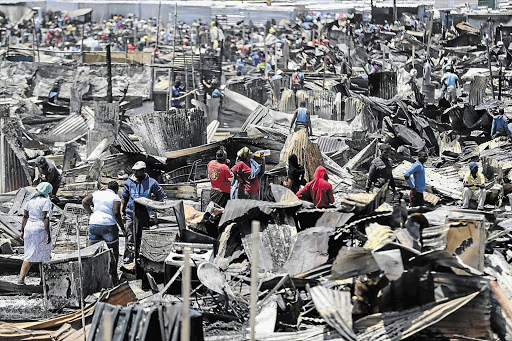 WASTELAND: About 1000 shacks were gutted in a huge blaze in Masiphumelele, near Fish Hoek, yesterday
Image: ADRIAN DE KOCK

The City of Cape Town is doing everything in its power to ensure that the debris left behind by a blaze which claimed the lives of two people and destroyed 800 shacks at an informal settlement near Fish Hoek at the weekend is cleared, Human Settlements Member of the Mayoral Committee Benedicta van Minnen said on Monday.

She had visited the site of the fire on Monday and said the clearing of the site was a matter of urgency so that affected residents could begin to reconstruct their homes.

However, Van Minnen warned that there would be specific areas where residents would be permitted to build the structures.

"A survey was also done this morning to determine the exact extent of the fire so that the layout for the rebuilding of the structures can be done in a manner that will group the structures together and leave space to ensure that emergency services can access the area and that fire breaks are established and maintained."

She said no structure should be erected in the area's fire breaks.

"This partially re-blocked layout, will require affected households to construct their structures in demarcated blocks."

Officials were still on-site clearing the debris, she said.

The City would provide affected residents with enhanced emergency kits, to assist them in rebuilding their homes.

Those affected by the fire were currently being accommodated in the Masiphumelele Community Hall.

Those wanting to make donations could make them directly to the South African Red Cross Society or Living Hope Church along Kommetjie Main Road.