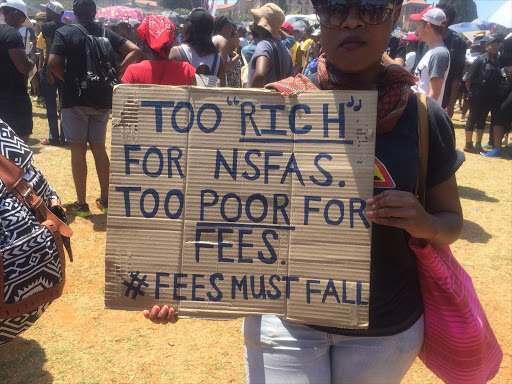 Students from South Africa's universities converged on the Union Buildings in Pretoria in support of the #FeesMustFall movement. File photo
Image: Mmalegong Ramutloa

Tears streamed down the young man’s face when he heard the announcement. There would be a zero percent increase in fees.

A female friend held his face to hers and they smiled. Locked in his arms, they celebrated the moment. Around them, the news hit the weary Stellenbosch students like a wave on that Friday in October. Some jumped up. Slowly it sunk in what they had achieved.

Over 21 000 people liked the photo of the embrace on Facebook. Many said it represented the hope of a racially united South Africa.

The pair responded by saying that it was merely the beginning. The country still had a long way to go.

The dissatisfaction had started more than a week earlier:

A bridge under construction collapsed over the M1 highway near Sandton. Two News24 journalists were driving to the accident scene when they passed Wits University.

"These people are trying to put us out of school. My mum is a maid and she can’t afford to pay the fees," a young woman said.

The group did not budge and refused to negotiate with anyone. The students stayed there for the rest of the week.

Wits University Vice-Chancellor Adam Habib arrived on campus from Durban and was met with cries of "Fire Habib" and "Voetsek Habib". He met the university’s council to discuss the students’ demands.

By the weekend, the university had agreed to suspend its decision to hike fees by 10.5% until an agreement could be reached.

Wits students flocked to the university’s Great Hall, waiting to hear from council.

Incoming SRC president Nompendulo Mkatshwa led a group of women with their hair in doeks. Academic staff joined students in the song and dance.

Students forced their way into Senate House. News spread that council would not address students and they moved to Empire Road and blocked traffic. One motorist drove through the crowd. His van was overturned.

Around 1 400km away, groups of University of Cape Town (UCT) students stopped vehicles from entering campus that morning. Arriving scholars scratched their heads and asked police officers what was going on. Students entered on foot. Some pushed through a hole in a fence to make their way to class.

Tuckshop owner Henry Daniels, 81, sat in his bakkie on upper campus and stared at the barricade as the sun baked down on around a R1 000’s worth of bananas and apples in the back. He had been a cleaner at the university in 1979. He and his wife started their food business in the nineties.

"I was active in the struggle. We also used to blockade this road, but we let people in. We were successful in protesting for bigger salaries and the students stood with us that time."

He said many of his grandchildren were now studying at various universities.

Students occupied Bremner House, the administration building. The university obtained a court interdict to remove them and police arrived. They used stun grenades and teargas to disperse them. Many were arrested and bundled into vans.

Students rejected Higher Education Minister Blade Nzimande’s announcement of a 6% cap on fee increases. Rumours abounded that there would be a nationwide protest the next day. People were mobilising around the country. Wits students continued to block roads, this time at the medical school. Parents joined their children in the protest. Celebrities Simphiwe Dana and AKA marched with the crowd.

In Cape Town, DA leader Mmusi Maimane tried to address UCT students. He was told to "hamba". They made it clear they did not want him there and he left.

Hundreds marched between UCT campuses to pick up students and workers. There were calls to stop outsourcing.

They made their way to the Rondebosch police station to demand that arrested students be released. A student leader asked their "white allies" to move to the front and act as human shields because they knew police would not shoot them. Scores did so.

The group only dispersed once it was agreed the detainees would be released and dropped off at UCT.

In Stellenbosch, public order police confronted a small group of students who had occupied Admin B building and renamed it Winnie Mandela House.

Finance Minister Nhlanhla Nene was presenting his medium-term budget as thousands of students made their way to Parliament to demand that Nzimande address them.

Fumes of noxious burning tyres rose over Louis Botha’s statue at the entrance. Chants of "Fees must fall!" filled the air. Uniformed riot police, fat with armour, stared at them.

EFF chief whip Floyd Shivambu arrived and was told to leave. Students did not want to have their protest affiliated with any political party. When it became clear that Nzimande would not emerge from the National Assembly, the crowd walked down Plein Street.

They suddenly picked up pace and rattled at the first side gate. Locked and unable to enter, they ran around the corner. They pushed open a gate on Parliament Street. Students broke through another entrance.

Students flooded the precinct with hands in the air to show they came in peace. Their only weapons were water bottles and placards.

They stopped at the entrance to the National Assembly and waited. Former president Nelson Mandela’s bust watched over the scene.

Riot police demanded they leave. They refused. White students formed a "human shield" at the front and kept their hands held up.

Three men in camouflage gear with black masks covering their mouths stood in front of the glass door leading into the National Assembly, holding large firearms. Their eyes darted around.

Police fired stun grenades. Students retreated as officers pushed them back. Some got into tussles. Others were detained and dragged to a spot behind the Assembly columns.

Journalists tried taking photos of the people lying at the columns. An overweight officer stuck his finger out and warned them not to. More stun grenades went off.

Through the explosions rose the chorus of the national anthem, Nkosi Sikelel' iAfrika. The fists of seated students rose into the air. They repeated the lines of "Siyaya, noba besidubula" (We are forging ahead, even as they shoot at us).

By late afternoon, police had managed to secure the precinct. Nzimande appeared and looked onto the sea of students behind the gate on Plein Street. There was booing and chants of "zero, zero, zero".

He tried to speak through a megaphone, but nobody could hear him about the noise of the crowd. He left. Some students confronted MPs leaving the area.

"Are you going to join our struggle or walk away?" one student asked. MPs smiled or laughed and walked away.

He said the ANC should fulfil the promises it made 22 years ago.

In Cape Town, crowds gathered outside the Cape Town Magistrate’s Court ahead of the appearance of 29 people arrested during protests. They included Kevin French, Markus Trengove, Nathan Taylor, Chumani Maxwele, Kgotsi Chikane and Lindsay Maasdorp. Rumours that they would be charged with treason were quickly dispelled. Another group of 23 also appeared. All were released on a warning.

Mostly Cape Peninsula University of Technology students marched down Darling Street. Their destination was the Granger Bay campus a few kilometres away. They managed to slip past police and made their way through the V&A Waterfront. Tourists drank wine and stared.

Students enrolled at the University of KwaZUlu-Natal and the Durban University of Technology marched to Durban’s City Hall. ANC and DA representatives tried to join, but were booed away.

President Jacob Zuma met student leaders and university management at the Union Buildings to try and end the impasse. Students gathered on the lawns of the Union Buildings and started pushing against the fence. They broke a hole in it, but did not go through because of riot police on the other side.

Many students left as they did not want to be associated with the violent behaviour of a few.

Zuma announced a zero percent increase in tuition fees in 2016, but the message did not reach students.

In Stellenbosch, a few hundred students walked to the police station after seeing two women being bundled into a van. A young man broke down in tears and shouted: "You can’t do this to my people!"

Officers locked the station when students tried to push their way in. The group backed away when they heard the women would be released without charge. Some sang the national anthem. Student leaders told them to stop, saying they could not sing the anthem of a country oppressing them.

News24 content producer Kelly Anderson received news of Zuma’s announcement on her phone and turned to a student leader with a megaphone. They did not realise what she was saying at first. Eventually they read the message out and people started cheering.

At the University of the Western Cape, a 2 000-strong crowd started cleaning the student centre after hearing Zuma’s decision. Afterwards, some of them relaxed on the lawn outside to enjoy the rest of their Friday.

Following Zuma’s announcement, rumours began making the rounds that Wits SRC leaders Shaeera Kalla and Nompendulo Mkatshwa had been coerced by the Progressive Youth Alliance to bring the #FeesMustFall campaign to an end.

A large part of the student body returned to academic work. A small group continued the fight for free university education and an end to the outsourcing of cleaning staff.

In November, at some campuses property was vandalised and a number of students and staff members were arrested. Wits, UJ, and UCT management agreed to start the process of insourcing cleaning staff.

In a bid to avoid more protests at the beginning of the 2016 academic year, Zuma announced government would spend R6.8bn to cover the National Student Financial Aid Scheme's and universities’ funding shortfall.