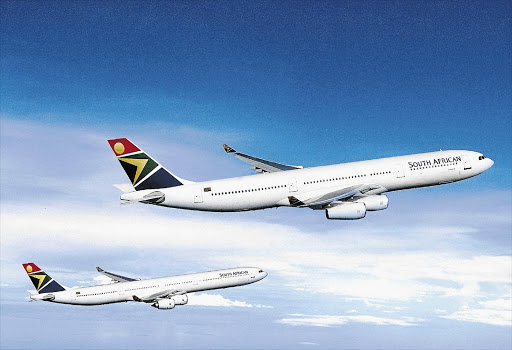 HEADWINDS: The national flag bearer has incurred R15-billion in losses over the past 10 years and has had five CEOs in the past five years as it battles to turn its finances around
Image: Business Times

Travellers are being warned about a mile-high syndicate operating on board flights to Asian destinations, alleged to have netted stolen goods to the value of R6.5 million in the last 9 months.

Figures released by the Hong Kong police point to an increase in theft during flights that land in Hong Kong.

Over the past five years, reported cases of this mile high criminal activity have more than doubled and on 21 December 2015, South African Airways passenger Warren Becker became one of the latest victims.

Becker wrote to Traveller24 when he landed back in South Africa after what he calls a "ruined holiday".

He said on route to his holiday, on board SAA flight 286 from Johannesburg to Hong Kong, he dosed off. When he woke, a fellow passenger told him to check his bags as she had seen people rummaging through it in the aircraft's lavatory.

"When I checked my bag, which was locked for extra security, I found the lock broken and foreign currency as well as some extremely valuable jewellery had been stolen".

"They left all the South African Rands as well as my camera, as if to make it look like nothing was taken," he told Traveller24.

According to South China Morning Post, the stolen goods on in-flight robberies predominately include cash, jewellery and smartphones.

When the SAA flight landed in Hong Kong, local police authorities came on board and "a search was done on certain passengers", Becker says.

But Becker says he believes there were more than one or two criminals involved in the "syndicate", and that the police "found nothing on the suspects because they were working together and handing the stolen goods around".

Becker opened a criminal case in Hong Kong, and contacted SAA regarding the matter, but is yet to receive any feedback from the latter.

Traveller24 also attempted to contact SAA, but is yet to receive any response regarding the matter.

Similar criminal activity has been reported on other international flights bound for Hong Kong.

Jakarta Post reported in September last year that the offenders in these cases usually checked-in without any luggage, stayed for only one day in their destination, owned passports and tickets and are allegedly part of a criminal syndicate.

Becker says he coincidentally came into contact with his alleged robbers on his return flight back to South Africa from Hong Kong again on 7 January 2016, more than two weeks after the incident.

He also says the woman who pointed out the criminals on the outbound flight from SA was with him on the return flight again, and they managed to take photographs of the alleged criminals, which they are willing to show to the police.

He says the cash stolen out of his bag was all of his spending money for the holiday. "I had to make use of my credit card, and now I have to pay back the bank. I also borrowed money from my girlfriend. It ruined my holiday.”

Cabin baggage theft modus operandi to be aware of:

- Hong Kong flights are high on the criminal activity list. Be extra wary when you're on a flight there.
- Suspects more than likely sit on the back row of the plane watching for the ideal opportunity.
- They are said to systematically pull the bags from the overhead lockers, while passengers rest or watch movies.
- Bags are then pilfered at the back of the plane for valuable contents.
- International airlines are allegedly targeted, with “lenient penalties” making it worth the risk.

- Always lock your hand luggage.
- Do not assume luggage under your seat is safe, keep this in mind when leaving your seat or heading to the toilet.
- Don't assume you're safe in business class either.
- If in doubt, wear or keep any valuables on you. Better yet, leave valuables behind when you travel.
- Don't travel with cash. Travel with travellers cards rather.