How much jail time does Oscar now face? 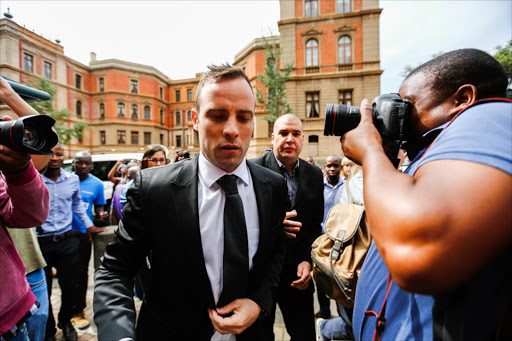 08 December 2015. South African Olympian Oscar Pistorius arrives at the North Gauteng High Court in Pretoria for his bail application. Moments later he was granted bail while he awaits sentence for murdering his girlfriend Reeva Steenkamp in 2013. Bail was set at 10,000 rand, Pistorius was deemed not to be a flight risk by Judge Audrey Ledwaba. Pistorius can remain under house arrest at his uncle's home until sentencing next year April the 18th and will be electronically tagged. He also had to hand over his passport.
Image: Moeletsi Mabe/ The Times

The minimum sentence for murder is 15 years, unless he can provide substantial and compelling reasons to deviate from this prescribed sentence.

Marius du Toit, a defence lawyer and former prosecutor, said he believed the High Court in Pretoria may deviate from the minimum sentence, but this did not mean that Pistorius would sit in jail for a long time.

"To be honest, circumstances of this case are so unique. It wasn't a spousal abuse that ended up in a murder. This was a mistaken identity of a burglar and being reckless in respect of the life of the perceived burglar," he told News24.

"Those set of facts are so unique that the court will deviate from [the minimum sentence], in my view, and find substantial and compelling reasons in his favour and also the fact that he has already served a period of time."

Du Toit said Pistorius could find himself going to jail for 12 years instead of 15.

The Constitutional Court dismissed Pistorius' application for leave to appeal his conviction because of a "lack of prospects of success".

The order was dated Wednesday.

Du Toit said Pistorius could not change his conviction, however, he could appeal his sentence.

"If [the court] imposes 12 or 15 years he can, of course, appeal that sentence but the conviction of murder will stand, which means Oscar is guilty of murder and that's the end of the line for him."

Pistorius's culpable homicide conviction was overturned for a stronger conviction of murder by the Supreme Court of Appeal (SCA) last December in Bloemfontein.

The SCA's ruling came almost three years after Pistorius shot and killed his girlfriend Reeva Steenkamp, later stating he mistook her for an intruder. He fired four shots into the door of a toilet cubicle in his Pretoria home on Valentine's Day in 2013.

He served one-sixth of his five-year sentence in prison and was released in October to serve the remainder under correctional supervision.