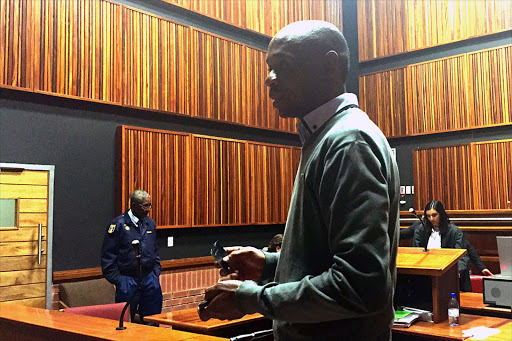 Donald Sebolai leaves the dock at the Johannesburg High Court in Palm Ridge after proceedings had wrapped up for the day
Image: Roxanne Henderson

Convicted murderer, former Jozi FM DJ Donald Sebolai was on Friday sentenced to 20 years behind bars for the murder of his girlfriend Dolly Tshabalala.

Judge Cassim Moosa handed down the sentence on Friday at the Johannesburg High Court, sitting at the Palm Ridge Magistrate's Court southeast of Johannesburg.

Sebolai, also known as DJ Donald Duck, was sentenced to 20 years for murder and to 5 years for attempting to defeat the ends of justice. The sentences will run concurrently.

Moosa called Sebolai's crime “callous, merciless and heinous” and said he had considered the killing and the circumstances surrounding it in reaching a decision on sentencing.

Sebolai, 38, was convicted in October of murdering his girlfriend Rachel "Dolly" Tshabalala, 32. Tshabalala was stabbed in her pubic area when the couple had a fight at Sebolai's Soweto flat in 2014. She bled to death.

Sebolai was also found guilty of attempting to defeat the ends of justice for tampering with the crime scene by mopping up Tshabalala's blood on the floor. He was acquitted of a motor vehicle theft charge.

Moosa made specific mention of the circumstances relating to Sebolai's second conviction – that he had cleaned up Tshabalala's blood from the floor of his flat, changed her clothes and removed the murder weapon from the crime scene after the stabbing.

Moosa said this and the fact that he had failed to get Tshabalala medical attention after the stabbing showed that he intended to kill her. Moosa said he believed it was appropriate to give Sebolai a sentence higher than the prescribed minimum of 15 years.

"It is clear from the evidence that it was a senseless killing of the deceased by the accused," Moosa said.

Members of Tshabalala's family and friends, who have been following the case closely, wept during proceedings.