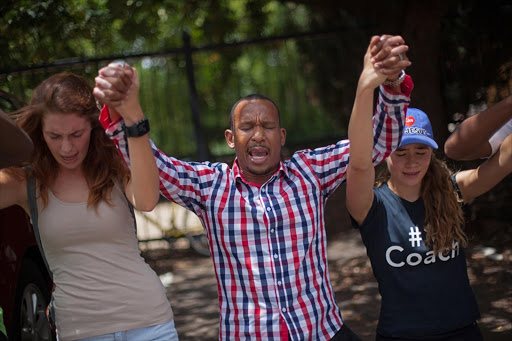 Students from the University of Pretoria gather in numbers outside the main University entrance to pray for a solution to the ongoing standoff between race and language issues that the tertiary institution is currently facing.
Image: KEVIN SUTHERLAND

The conference’s Justice and Peace Commission released a statement yesterday calling for church leaders “to be included in mediating campus deadlocks”.

Bishop Gabuza‚ Chairperson of the Justice and Peace Commission‚ said: “As the Church we firmly support the campaign of the students to end financial barriers to accessing and completing higher learning and other equity-related concerns. However‚ the escalation of campus violence and vandalism is playing into the hands of those who seek to discredit the legitimacy of this important campaign.”

“They have not done enough to promote an environment that enables open and honest dialogue to happen. We call for honest dialogue on the issues raised by the students at various campuses.

It called on the government to include church leaders in mediation processes.

“We call upon the government‚ university leadership‚ political parties and Church leaders to sit around the table and address the issues at various academic institutions that are marked by campus violence.”

The commission called on political parties and their youth wings “to show greater ethical leadership in relation to the current crisis in tertiary education”.