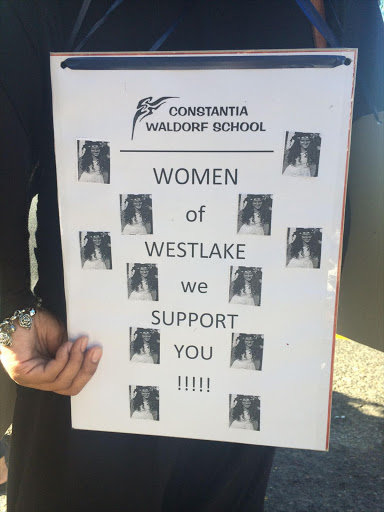 A small crowd of protesters gathered outside Wynberg Magistrate's Court on Friday morning for the appearance of three men charged with murdering 16-year-old Franziska Blochliger in Tokai forest on Monday.

Among them were a delegation from Constantia Waldorf School‚ where Franziska was in Grade 10. One of their placards expressed support for the women of Westlake‚ a low-cost housing development near the crime scene where the suspects were arrested after being pointed out to police by neighbours.

The men due in court on Friday were arrested in Westlake on Tuesday evening after Franziska's stolen iPhone was activated in the area‚ allegedly when a man negotiating to buy it asked for proof that it was working.

9.47am: The crowd packing the courtroom have been asked to move from Court 4 to Court 6. Court 4 is dealing with old cases

When police arrived‚ community members pointed out known criminals they suspected of being involved in trying to sell the cellphone.

Community leader Anthea Thebus said: "We are very angry. We are not criminals‚ we don't stand with the criminals‚ we are against criminals. We're also mothers and we know how it must feel. It's not right."

On Wednesday‚ hundreds of people from Westlake led a march to Lower Tokai Park and tied yellow ribbons around the fence where numerous bouquets of flowers have been placed in memory of Franziska.

Residents from Westlake‚ Tokai‚ Kirstenhof and other surrounding areas sang Nkosi Sikelel’ iAfrika and all joined hands in prayer as a pastor prayed for Franziska's parents‚ Florian and Shireen‚ from Muizenberg‚ and crime-affected communities across the country.

Tokai residents said they were touched by what they saw as the Westlake community reaching out to them.

"The struggle against crime is not only the struggle of the rich community‚" said Thebus. "It is our struggle too. We are sick and tired of these criminals who live among us‚ and very saddened by what has happened."