Students at the University of the Free State will no longer have the option of learning in Afrikaans. 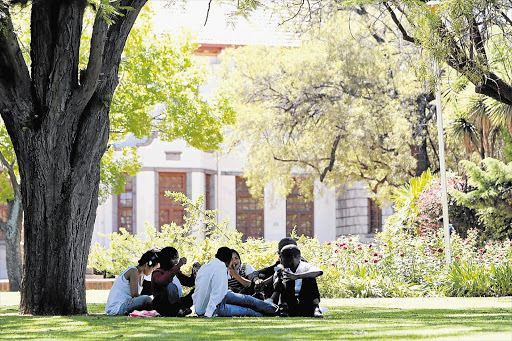 DIVIDED, BUT UNITED: Black and white students at Free State University have stood together to condemn the attack
Image: Supplied

The university's council unanimously decided to adopt English as the main language of instruction across its campuses.

The new language policy becomes effective at the start of the 2017 academic year.

University spokesman Lacea Loader said students who enrolled prior to the decision being taken will continue their degrees as per enrolment in Afrikaans.

But as of the 2017 academic year all first-year students will be taught in English.

The university is one of several in the country that has been grappling with language-related protests, many of which turned violent and created divisions between students.

The UFS council was given the mandate last year to review its language policy and, after a unanimous vote, it was decided that English would be the primary medium of instruction of undergraduate and postgraduate students at its Bloemfontein, QwaQwa and South campuses.

Loader said there would be exceptions, including professional programmes, such as those who were studying to teach Afrikaans and theological students who wished to minister at traditional Afrikaans-speaking churches.

"This arrangement must not undermine the values of inclusivity and diversity endorsed by the UFS," she said.

Speaking to The Times, AfriForum spokesman Alana Bailey said the organisation did not agree with the university's language policy as, given its demographics, it excluded Afrikaans- and Sesotho-speaking students.

"We believe the Bloemfontein campus students still prefer Afrikaans, given the area's demographics, and at least one of the three campuses should offer Afrikaans as a medium of instruction. In the long run English will be the only language catered for. There needs to be promotion of Afrikaans and Sesotho," said Bailey.

She said AfriForum had given input on the matter during the consultation process but had not received feedback.

AfriForum is considering challenging the decision through the courts.

UFS Student Representative Council president Lindokuhle Ntuli said: "This is the kind of change we have been advocating. We have witnessed division and racial debacles under the parallel medium."

Higher Education Transformation Network national spokesman Hendrick Makaneta welcomed the change. He said it was not a "complete victory" in the battle for transformation but it was a positive start.

The University of Stellenbosch has until the end of this month to implement its 2014 language policy requiring students to be taught in English and Afrikaans in separate classes. The university was taken to court for failing to ensure that lecturers were adhering to the dual-language instruction policy.

The High Court granted the university an extended deadline until March 29 to implement its language policy of 2014.

"Some of our students from rural areas have problems with English as a medium of instruction, especially in their first year of study," said university spokesman Susan van der Merwe.

"For this reason the university is expanding its parallel-medium offering [separate classes in English and Afrikaans] where viable. This is applicable to classes of 250-plus students."

The University of Pretoria is yet to find a solution to its language issues. A language forum has been established which has proposed that all lectures be taught in English.