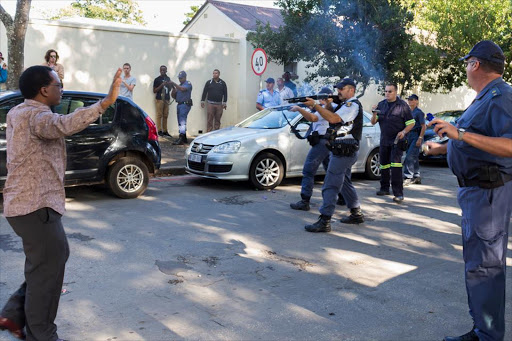 At least three protesters have been arrested at Rhodes University for public violence.

They were protesting over a list of alleged rapists that was circulated on social media late Sunday evening‚ 17 April‚ as well as what protesters call the culture of rape at universities.

Video footage of the arrests was posted around 9am this morning (Wednesday).

Reports of students being pepper sprayed while Rhodes’ management watched‚ circulated moments before the arrests.

Rhodes management has announced a full academic shutdown in light of the police action. Video footage was shared showing Vice Chancellor Dr. Sizwe Mabizela asking police to stop their actions against the protesters‚ and police continue to shoot rubber bullets at protesters.

This follows two days of protests across campus‚ including a large one yesterday afternoon‚ in which students were dancing topless to express their rights over their bodies.

In response to requests from students‚ a task force is being convened to help address holes in the policy on sexual assault on campus. The announcement was made this morning via email that a meeting for all interested staff and students will be held at 4pm in the Eden Grove Red lecture theatre. The meeting will be chaired by staff member Thabani Masuku and student Catriona Macleod.

The list of alleged rapists consists of 11 names‚ and after being re-posted in the popular Rhodes SRC (Student Representative Council) Facebook group at about 8pm on Sunday‚ a large gathering of students proceeded to the various campus residences of the men named on the list and called for them to face the crowd.

According to Catherine Deiner‚ Rhodes’ Media Relations Officer‚ management engaged with the students on multiple occasions‚ and it wasn’t until 8am Monday morning that the South African Police Service (SAPS) was able to intervene and remove a single student from the custody of the protesters. The other two men had escaped or run away‚ and were unharmed.

During the night a list of demands was given to vice chancellor Sizwe Mabizela on behalf of the protesters‚ who claim no affiliation to any student organisation. The students also called for a shutdown‚ which was denied by management. However‚ the students gathered around 9am Monday morning‚ 18 April‚ at the Drama Department to boycott classes.

The protesters marched through various departments‚ calling students in lectures to join them. A student‚ Niké Mes‚ was making announcements in many classrooms. “We’re tired of being scared. We’re tired of having to mobilize a protest of people like this for a simple issue of not wanting to be raped anymore‚” she stated.

Their numbers were bolstered until reaching the Law Department‚ where students stayed in their classrooms. One law student who chose to remain anonymous questioned the tactics of the protesters‚ stating that the men on the list have a right to be presumed innocent until guilt is proven‚ and that due process has not been followed.

Among the protesting students‚ few knew about the list of demands‚ or what was happening. Most reported joining the group to support rape survivors. Students on campus were also hesitant to speak to journalists‚ for fear of the public shaming that has been prevalent on social media since the list was posted on facebook.

“I’m just afraid that some of those men’s names were put there maybe [because of grudges]. I don’t know‚” said one male student‚ who did not want to be named.

The leaders of the protests admitted to using vigilante tactics‚ but believe that their actions are necessary as the system has failed them. “The university’s not helping us. We need to help ourselves‚” said Tarclin Jacobs‚ one of the protest organisers.

Dr Mabizela made a statement at 4pm on Monday‚ promising to create a task force that would help to reshape university policy around issues of sexual assault. He promised to keep the Health and Counselling Centres open at all times‚ as well as hire more staff.

The crowd was not satisfied. They yelled‚ “What about the men on the list?” Mabizela asked‚ “Are you saying we should round them up and throw them out of the country?” The crowd screamed a resounding “Yes!”

The students were not satisfied with the statement made by Mabizela. “I just feel like there’s like this system of victim blaming‚ like they’re blaming the girls for not reporting on time‚ for not doing what they should’ve done‚ taking the correct measures and stuff‚” said one female protester who did not wish to be named.

The protesters gathered at 7pm at the Drama Department (also known as Purple Fee Square among protesting students) to discuss Mabizela’s statement. They were upset that management did not meet all their demands‚ primarily those of punishing and naming those accused of sexual assault.

While Mabizela maintained that there needs to be a conviction‚ students want more. “The accused need to be identifiable because a rapist never stops raping. We need to know who these people are‚” said Tarclin Jacobs.

Barricades to all major entrances to campus were erected at 8pm on Monday evening. The group marched from residence to residence‚ gaining support. The group mostly disbanded by 2am on Tuesday morning.

At about 5am on Tuesday‚ Rhodes SRC issued a statement calling for an academic shutdown of campus for the day‚ meaning all lectures and seminars would be cancelled‚ but essential services would remain open. Many parts of campus continued as usual.

The barricades were removed at about 7am‚ but put back up around 11am. As of Tuesday afternoon‚ small protests continued to spring up around campus‚ but were quickly disbanded.

There is confusion on campus as to who is running the campaign‚ whether or not it will comply with the requests of the SRC group‚ and what will happen next.

The men on the list have remained silent on social media‚ and have not returned to their homes. One of the accused‚ who wishes to remain anonymous‚ is distraught. “I’m not myself anymore. I don’t think I’m as stable as I want to be‚” he said‚ clutching a blanket‚ wide-eyed and jumpy.

He feels silenced and unable to share his story. “No one will pay attention to that. No one cares‚” he says. Although he is being accused of being a perpetrator‚ he feels like a victim. “I’ve never in my life been served with charges… I’m publically shamed for something that I know I never did.”

He is not lacking in sympathy for the protesters. “I agree with the protest 100%. It’s just some of the methods that may be questionable.”

-This article was first published on GroundUp.