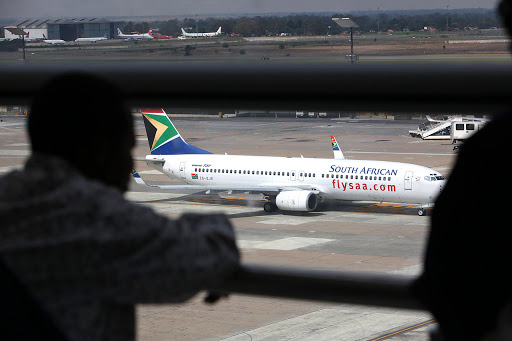 An SAA Aircraft on the runway at the OR Tambo International Airport. File photo.
Image: Gallo Images / The Times / Alon Skuy

South African Airways has had its wings clipped by its customers.

Skytrax announced the awards for the world's top 100 airlines at the UK's Farnborough Airshow.

The world's top airline companies are voted for by airline customers.

Taking the top position at the awards, which is the global benchmark for airline company excellence, was Emirates, which moved up from fifth place last year.

Qatar and Singapore airlines are ranked the world's second- and third-best airlines this year.

The 100th-ranked airline is India's SpiceJet, which fell six places.

Over the past two years SAA has courted controversy over a multibillion-rand lease-purchase deal with Airbus for new aircraft, with the national carrier's treasurer, Cynthia Stimpel, suspended last week for "misconduct" in a move seen as another step by the airline's board to remove defiant staff members.

Last week, Business Day reported that Stimpel had objected to SAA appointing unknown "boutique financier" BnP Capital to advise it on the restructuring of its R15-billion debt and to raise the funding, in return for a R256-million success fee.

His axing was believed to have been linked to his refusal to back down on reigning SAA board head Dudu Myeni.