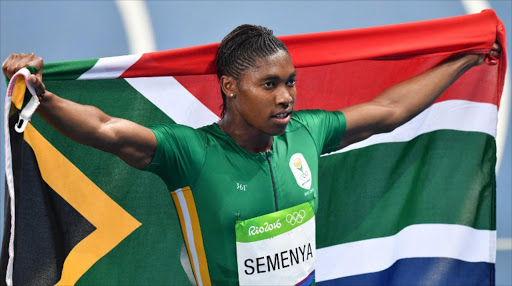 Caster Semenya used her golden triumph at the Rio Olympics to speak out against discrimination she has faced in sport.

Semenya became the first black South African woman to win an Olympic medal gold when she triumphed in the women's 800m in a 1min 55.28sec national record.

Semenya, 25, slapped down a prying question put to her and her fellow medallists at the post-race press conference, asking if they'd all been forced to take medication to lower testosterone levels and what effects that had on them.

Wambui politely suggested they focus on the track performances, not the medication.

Semenya took a firmer stance. "Excuse me, my friend," she said to the journalist.

"I think tonight is all about performance. I think this press conference is all about the 800m we ran today, so thank you."

Semenya and other female athletes are believed to be intersex and benefiting from the elevated testosterone their bodies produce naturally.

The Court of Arbitration for Sport last year ruled that there was no proof that extra testosterone was beneficial to intersex athletes and ruled that they need not take medication.

The IAAF has until mid-2017 to submit proof to the contrary.

During interviews in the mixed zone earlier Semenya had spoken about sport uniting people.

Asked to explain what she meant by that, her reply clearly referred to her own experiences of ridicule and criticism, which started the moment she first burst onto the international scene in 2009, winning the world championships as a junior athlete.

"It's about loving one another," said Semenya, who was also subjected to humiliating gender tests.

"It's [not] about being muscular. It's all about sports."

There had been concerns before the Games that Semenya would need protection from the scrutiny she would face if she won the Olympic gold.

But these proved to be unfounded, because SA's golden girl has reached a point where she is happy within herself.

Semenya had no qualms talking openly about her gay marriage to, and her love for, her wife Violet.

"My wife is waiting for my call," she said at one stage.

During the press conference one questioner asked her if she was happier now than she was four years ago, when she won silver at London 2012.

"Of course, that's what happens when you get married," she said.