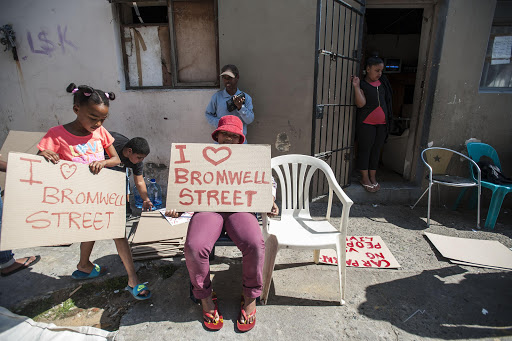 The developers who want to evict 23 families from Woodstock in Cape Town have given R50 000 to a crowdfunding initiative to help them find affordable homes in the area.

Jacques van Embden‚ director of The Woodstock Hub‚ which bought the families' rented homes in Bromwell Street in 2013‚ said on Tuesday: "We are hopeful that we will be able to garner support from concerned citizens and civil action groups to create a solution in assisting these families in finding residences."

Van Embden said the company also wanted to join forces with NGOs to help the Bromwell Street residents find jobs in the area.

The company's offer followed the publication of an open letter to The Woodstock Hub from the Bromwell Street families‚ acknowledging the company's right to evict them but pleading for assistance to help them stay in the area.

"Each family has searched very hard for another place to stay but we can no longer afford the high rentals being asked in Woodstock and surrounding neighbourhoods‚" said Charnell Commando and Graham Beukes on behalf of the families.

"We think that this moment provides you with an opportunity to make a moral choice and to do the right thing.

"Do not evict us. Do not make us homeless. Meet with us. If we are forced to move we want to stay in our home community‚ our support networks‚ places of worship‚ schools‚ families and the many opportunities - like jobs‚ education and safety - found in the city."

Despite its olive branch‚ Van Embden said the Woodstock Hub could not grant another extension on the eviction deadline of September 9 set by the Cape Town High Court.

"The property was purchased over two years ago with the intent to add much-needed density to the Woodstock area and the end result will be 50 to 75 high-density middle-income rental homes that will not only become additional urban homes‚ but also create jobs in the process."

Van Embden said the company wanted to be part of the solution to the urban housing crisis. "We are working towards engaging with the City of Cape Town‚ other developers‚ relevant NGOs and various stakeholders in setting up a forum to determine how best these stakeholders can collaborate in making a positive and effective contribution on urban housing development‚" he said.

In their open letter‚ Commando and Beukes said that removing the 23 Bromwell Street families to a relocation camp such as Blikkiesdorp or elsewhere on the Cape Flats would make them vulnerable to crime.

"Our children risk becoming victims of gangsterism and drug abuse‚" they said. "We stand to lose our entire way of life and our children's futures in the city.

"An eviction of this type will tear apart the community into which we were born‚ and into which we have invested our entire lives."

The letter said Saturday's protest at the Old Biscuit Mill‚ which neighbours their homes‚ had been an opportunity for the people of Cape Town to speak their minds on the removal of poor families from Woodstock and Salt River.

"The whole city is watching what will happen next‚" they said.

After Saturday's protest‚ the Bromwell Street residents said their next target would be the offices of the Woodstock Hub‚ "unless directors Jacques van Embden‚ Arnold Shapiro‚ Arthur Winkler and Ronen Zekry respond within seven days to the Bromwell Street families' demands".

They added in a statement: "On Saturday‚ Bromwell Street took their power back. They brought the struggle against evictions to the heart of gentrification. With the support of Reclaim the City‚ they occupied the the Old Biscuit Mill‚ and sent a message: it ends here‚ today.

"No more forced removals of poor families from Woodstock and the city. Bromwell Street is now the site and the champion of a much bigger struggle. We stand with them to end spatial apartheid in Cape Town.

"The Woodstock Hub's directors now know that they cannot follow through with their plans to evict poor families onto the street. Saturday's occupation showed that Bromwell has the power and support to stop some of Cape Town’s biggest developers in their tracks. This sets a precedent for all poor people wanting to remain and find homes close to the inner city. They can fight back."