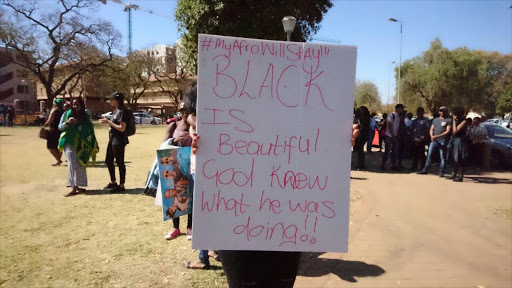 A defiant Port Elizabeth pupil has accused her school of racism amid threats of being barred from writing her first exam tomorrow if she does not get rid of her afro hairstyle.

Grade 12 pupil, Unathi Gongxeka, told the Herald said she felt "violated and victimised" after the  incident on Friday when teachers at Lawson Brown High School allegedly told her to straighten or "relax" her hair before they attempted to tie up her afro in order "to make it more beautiful".

If she didn't comply, the 18-year-old was apparently warned she would not be allowed to write her trial examinations.

The school has denied claims of racism and that Gongxeka was instructed to straighten her hair. Principal Donovan Cairncross said the school was simply enforcing a long-standing hair-related rule which applied to all pupils.

"There was talk of hair not being in line with our code of conduct and pupils were told to tie up their hair. Pupils are alleging racism but we have asked them to point out incidents and no one has been able to," Cairncross said.

Gongxeka, who lives in Kwazakhele, said deputy principal Knip Joubert inspected pupils' hair on Thursday ahead of the exams.

"He told me to go to the teacher who is in charge of the hair committee to ask if my hair is appropriate. I was told to neaten it. On Friday again, the same teacher told me to tie it into a ponytail or push it back somehow. The teacher then told me to relax my hair to make it more beautiful."

Gongxeka said she would not be changing her hair and was determined to write her English exam. "If they do not allow me to write I will call my father," she said.

But Cairncross said the situation had been "blown out of proportion, other pupils are spurring Unathi on," he said. "The pupils are very emotional right now but the fact is that no one was grabbed by the hair."

He said the school would never chase a pupil away but a code of conduct dictated that pupils should be neat and presentable.

The Eastern Cape Education Department on Thursday said it was investigating the incident.

Spokesman Malibongwe Mtima said, "It is against the law for a school to discriminate [against] learners based on their hair, colour, race, religion and sexuality. If this is the school policy then it to be reviewed. It is this pupil's right to write her exams."

Pupils at Pretoria Girls High School also clashed with school officials this week, staging a protest over a policy that allegedly led to black pupils being told to straighten their natural hair.

Gauteng Education MEC Panyaza Lesufi met Pretoria Girls High School leaders and pupils on Monday and said he was touched by what he was told by pupils, many of them in tears.

"I have a natural afro, but a teacher told me I need to comb my hair because it looks like a bird's nest," one pupil said, adding she was given a brush and told to neaten her hair.

Another, whose hair was manhandled by a teacher, was told she had to cut it.

After meeting with the school's governing body‚ Panyaza Lesufi said that a resolution had been reached and all hostilities at the school will cease. The section of the school's code of conduct that deals with hair has been suspended with immediate effect. And schools in Gauteng with similar rules may face similar action.

Actress Florence Masebe who was recently called a "hobo" on Twitter for wearing her hair naturally, said black girls needed to be taught natural hair was beautiful.

"We are all beautiful."