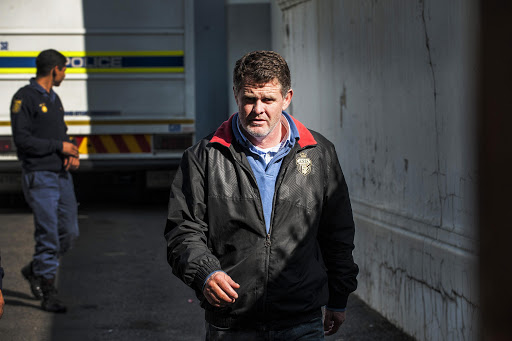 Murder-accused Jason Rohde is desperate to see his three teenage daughters after being released on bail‚ his lawyer said on Wednesday.

Rohde walked out of Stellenbosch Magistrate's Court on Tuesday afternoon after eight days in custody. He was arrested at his home in Bryanston‚ Johannesburg‚ and faces charges of murdering his wife‚ Susan‚ at Spier wine estate in Stellenbosch on July 24.

The CEO of Geffen International Realty Franchises is on bail totalling R1.1-million‚ and was ordered by magistrate Greg Jacobs to stay with his brother-in-law in Melkbosstrand until his next court appearance on September 23.

But lawyer Daniel Witz said Rohde had asked permission from the prosecutor and the investigating officer to make arrangements to see his daughters.

“They have endured eight long days without him while he was in custody in Cape Town‚ adding to the already traumatic circumstances they are working through after the loss of their beloved mother‚" said Witz.

"Mr Rohde is very relieved be able to communicate with his family and able to continue to support his children through this extremely difficult time.

"Each of them is coping through the memories and special bonds they all shared with Susan‚ and his eldest daughter is bravely facing the remainder of her matric year despite this tragedy.

"Mr Rohde will continue to fight for his innocence and remain fully cooperative in terms of his bail conditions and the ongoing investigation. In the interim‚ the family continues to mourn the loss of Susan with all those that knew and loved her."

Rohde is required to report to Melkbosstrand police station three times a week.

Susan Rohde’s body was found in the bathroom of the couple's hotel room with the cord of a hair-straightening iron around her neck. She had accompanied her husband of 23 years to a property convention at Spier.

Police changed the cause of death from suicide to murder following a pathology report which determined that the mechanism of death was allegedly “manual strangulation”.