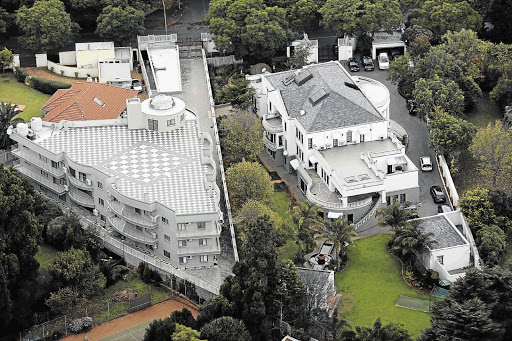 The controversial decision by the Johannesburg City Council to approve the Gupta family's application for the rezoning of the property on which their mansion stands is to be reviewed by the newly elected DA administration.

The Guptas' neighbours in the suburb of Saxonwold are up in arms - alleging that the city's planning committee ignored the facts when it approved the family's rezoning application just a week before the local government election that unseated the ANC in the city.

The Times understands that the planning committee approved the Guptas' application to legalise their structure on July 27 - the same day it visited the site to assess the application.

Now DA mayor Herman Mashaba intends to investigate the circumstances around approval of the changes to the structure.

His spokesman, Tony Taverna-Turisan, said: "The mayor is very disturbed by these allegations and will conduct an immediate investigation into what happened here.

"If any wrongdoing is found, immediate action will be taken.

"Under the new administration no one is above the law and all residents will be treated equally.

"The days of political patronage and favours for friends are over."

"The application was approved, the owner of the site must comply with the conditions of approval . The normal application process was followed, the application was assessed and referred for a hearing [because of] the objections [of other Saxonwold residents]. The hearing was scheduled a few weeks in advance to give due notice to all parties."

He did not specify the conditions of approval.

Since 2010 the Saxonwold & Parkwood Residents' Association has opposed the Guptas' application to the city for the rezoning of their property at 7 Saxonwold Drive to legitimise the construction of mansions already built, which are too large for the stand.

A 2013 application to have changes to the home approved was turned down by council.

Residents' association chairman Tessa Turvey said the council had simply rubber-stamped the Guptas' plans. She said the association were still waiting for formal notification of the granting of the application, said to have been sent by registered mail on September8.

"[The approval] sets a precedent for other properties in the area. The council appears to have ignored certain facts in that the use of the property is not for a single family, yet they stipulate this . in the approval.

"The council has also not specified when site development plans need to be effected on the property. The fact that the council has approved this application in isolation and not taken into account previous concerns [is worrying]," said Turvey.

She said the residents' association would decide whether to appeal this decision by the council.

"Privacy and devaluation of property is an enormous issue for the immediate neighbour, as well as continual parking infringements on pavements. It is yet to be understood how these plans were approved by the council," said Turvey.

The council's decision means that the family can continue with the merging of its adjacent properties at 5 and 7 Saxonwold Drive.

The house blocks a sewer: the building was built on an existing drainage system, contravening requirements that buildings must have adequate access to all drains below as well as the existing sewer connection.

The family owns three properties on Saxonwold Drive, the homes of brothers Atul, Ajay and Rajesh and their families.

A resident who wished to remain anonymous said it was "mysterious" how the application was approved this time after previously being rejected when nothing had been rectified.

"During the past six years the council has done nothing to rectify the situation but instead has allowed the Guptas to continue occupying the illegal building without any consequence. This approval will set a worrying precedent.''

Questions have also been asked about the council's decision to approve the plans just before the recent local government elections.

"The question is whether the council wanted to avoid any scrutiny of its decision," said one of the residents.

Days before the local government elections, polls showed the ANC could lose control of Johannesburg metro. The Gupta family are said to wield immense power due to their association with President Jacob Zuma.