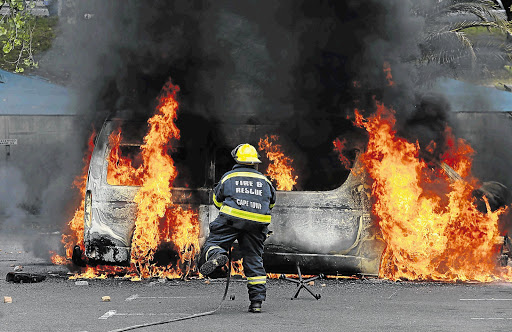 TURN UP THE HEAT: A fireman rushes to a minibus set alight by Cape Peninsula University of Technology protesters on the Cape Town campus yesterday
Image: ESA ALEXANDER

A brain drain that would hollow out South Africa's top tertiary educational institutions could be looming as panicked academics look for jobs overseas.

The Times in Cape Town was contacted by a group of academics who said that most of their colleagues are afraid to speak out against the current student anarchy and violence and are secretly looking for employment at more stable institutions.

The impending "mass exodus" looms as the stalemate between university managements and the student protesters continues.

A recent study by the International Monetary Fund found that skilled workers are exiting sub-Saharan Africa at an increasing rate, and that the number of sub-Saharan migrants living in developed countries could increase from about 7million in 2013 to about 34million by 2050.

One academic in the humanities faculty at the University of Cape Town, who asked not to be named, said he was looking for a position further afield and that other academics, not only at UCT, were doing the same.

"The gradual effect of the continued protests will be the eventual impoverishment of South African tertiary educational institutions," the source said. "The very best academics will look for, and easily secure, employment at more stable universities [elsewhere].

"Top researchers will choose to do their PhDs elsewhere.

"This will be disastrous, not only for South Africa but for Africa as a whole, since much of the research into challenges facing the continent emanates from the top South African institutions."

A lecturer in the science department said "a number of colleagues in my department and faculty, and in the entire research and academic community of the university, are looking for positions overseas, given the current climate of uncertainty.

"I personally am looking into job options in Europe, the US and other countries", with "freedom of speech vanishing" and "insufficient funds now a reality".

The exodus of academics would "bring South African universities down to the same level as the worst tertiary institutions in the world", the lecturer said.

Another lecturer, who also did not want to be named, said: "This is a double-edged brain drain. Top academics will leave and the wealth of knowledge and skills they pass onto students will come to a halt."

But for the Wits Black Academics Caucus the current situation is a batt le to be fought, not fled from.

This week the caucus said it had "the burden of enduring the same system that our students are rejecting" and was working towards "the decolonisation of our education system as a step towards transformation and redressing the dispossession that underpinned apartheid and colonisation experienced by our societies for centuries".

The president of the Academic Staff Association at Wits, David Hornsby, said he did not foresee a brain drain, and that at this stage the 780-member association was "deeply concerned about the higher education project and wanted to see it get going again".

Hornsby said "a lot of academics are committed to the idea that higher education and development go hand-in-hand. South Africa is a wonderful country and a positive place with so much potential, and a lot of colleagues want to continue to invest in and be a part of this project".

Achille Mbembe, a professor at the Wits Institute for Social and Economic Research, said the loss of academics will become structural.

"We will lose a lot of our higher-level staff . both in management and in teaching, and in research," he said, adding that people who want to build a career will leave South Africa because "laboratories cannot operate [and] there is chaos on the campus once in a while. We will see that haemorrhaging becoming structural, not just episodic. We'll see the collapse of the intellectual infrastructure, without which there will be no universities."